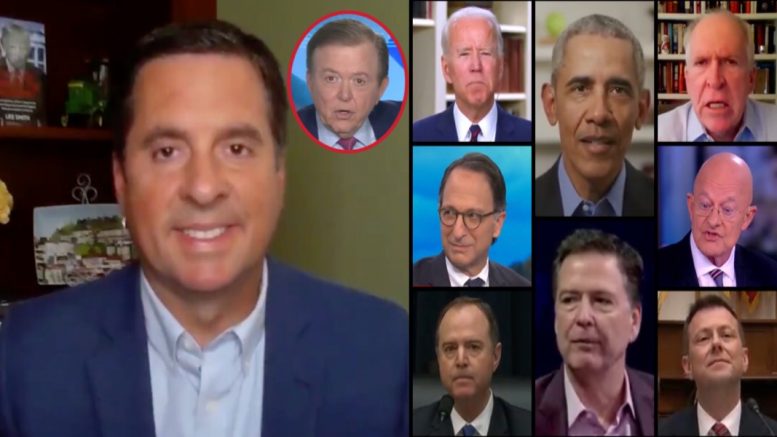 The document revealed the names of Obama-era officials who sought to “unmask” Lt. General Michael Flynn.

Congressman Devin Nunes told the Fox Business host: “I told you gets a lot worse, Lou. If you remember, this is the first time that most people in the United States ever heard of the House Intelligence Committee– had ever heard of me, it’s because we use to do real work, down working with patriots across the globe.”

Rep. Nunes explained when he first came out and held a press conference that he had seen “very troubling activities of using intelligence reports and intelligence apparatus to spy on Trump-transition officials and they were doing unmaskings”.

“You’re getting a glimpse of what I saw at the time and I would actually say, Lou, it’s even worse than this,” Nunes warned. “You’re only seeing folks that unmasked General Flynn. The reality is there were a whole lot of other Americans on the Trump transition team that were unmasked. Those need to be made public also,” the California Congressman recommended. Continued Below

“You could imagine at the time when I first learned of this– and you remember when I first came out and made this public, and I was very careful not to name any names, not to name what agency this came from– you may recall, all of the people that were out there in the Deep State, including the media. 90% of the media that worked for the Democratic Party– they unloaded on me and accused me of leaking information, leaking classified information,” said the Ranking Member.

“Remember I always use to say when they’re shooting at me I know I’m right over the target? That was really when I first learned– like wait a second, media, you should be appreciative of this right? You’ve always been a ‘watchdog’ of the intelligence agencies and if they’re spying on American citizens,” he continued.

Rep. Nunes noted that he spent months dealing with an “ethics investigation” into himself, adding that he was the “only one who didn’t leak through this whole mess, and all the other people did”.

“I’m glad I’m through with all of that, with the help of the American people. We made it through. But that’s why I continued to say: Nobody wants these bastards put in jail more than me!” he expressed.

Nunes also pointed out that when he was Chairman of the House Intelligence Committee that he had issued subpoenas. “That’s the only way we learned who had paid for the Clinton- Steele dirty dossier. It was because of the subpoena that we sent. I just want you to know that we did send subpoenas. And if I become chairman again, you can bet, I’ve already got the subpoenas ready to go,” the Congressman revealed.

Lock ‘em up! @DevinNunes says there is nobody in America who wants the deep state bastards thrown in jail more than him. #AmericaFirst #MAGA #Dobbs pic.twitter.com/Am2MqV0Elm

Further, Rep. Nunes said he is “working on additional criminal referrals” for the Mueller team.

“What happened to General Flynn and sitting on the Brady information, that’s not okay. … The whole Mueller team to spend 40 million dollars and not get to the bottom of who was colluding with Russians, when it was right in front of their face. They had the information that [Christopher] Steele could possibly be compromised by Russians. Where the hell was that in the report? That never came out,” he pointed out.

“So why would Mueller spend 40 million dollars and not get to the bottom of that? Why did they bring all these people from the outside that had these Clinton connections? All of that has to be looked at, including why did people from the highest levels of the DOJ and FBI that were supposed to be overseeing Mueller, and helping Mueller– why didn’t they help to block us, Republicans from getting information?” Nunes wondered.

“Did they obstruct a Congressional investigation? Did they lie or mislead Congress? … If we can prosecute Roger Stone, we damn sure better be able to prosecute these high-level people that were on the Mueller team and anybody at the DOJ and FBI that were involved in this fiasco,” he added.

(Related: Nunes Blasts ‘Enablers’ In The Media, Suggests They Get ‘Looked At For Treason’: “There’s Probably A Hundred Of Them”)