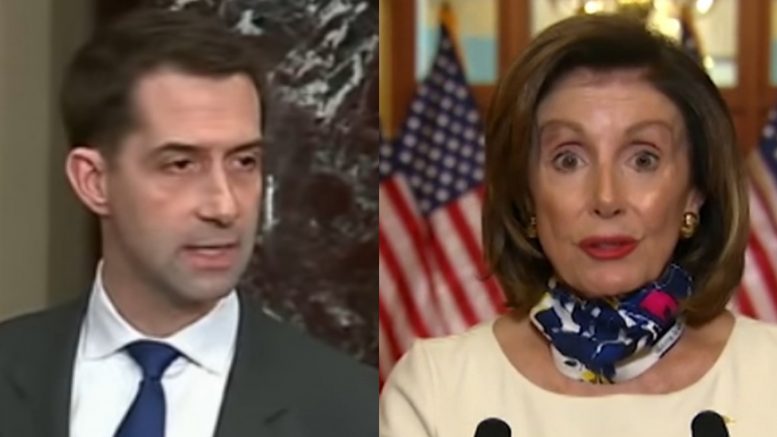 The sprawling plan, which Democrats are now referring tk as the HEROES Act, amounts to the biggest and most expensive aid package proposed to date to deal with the global pandemic, according to Fox News.

After reading over the plan, Senator Cotton accused Democrats of wanting to “waste money in the middle of a pandemic”, and he pointed out multiple “absurd provisions” included in the package that he thinks are completely unnecessary.

Nancy Pelosi’s 1,800-page virus “relief” bill is yet another wish list for liberal activists and donors. Here are just a few of the absurd provisions Democrats want to waste money on in the middle of a pandemic:

“Pelosi’s bill would give get-out-of-jail free cards to every federal prisoner with asthma or diabetes or who is over age 50.

“The Democrats even require states to send mail-in ballots to people for every federal election going forward, even if they just wanted one for this election. In other words, they want to permanently change our elections, even though it increases the risk of fraud. Continued Below

“And of course the Democrats snuck amnesty into the bill: Illegal immigrants in “essential services” would be authorized to work for the duration of the crisis. Meanwhile, 22 million Americans are unemployed. Don’t you think those Americans want a job?

“The Democrats’ bill also would require DHS to review the files of every illegal alien in its custody to determine whether they should be released in the middle of a pandemic and Depression-level unemployment.

“The Democrat-run House isn’t even in session, but Speaker Pelosi is hard at work giving your money to liberal activists and donors. This isn’t about the pandemic for Democrats. It’s about making sure a good crisis doesn’t go to waste.” Video Below

In ending, here is video of Tucker Carlson breaking down some of the “other things” included in the tremendous spending package proposed by House Democrats: