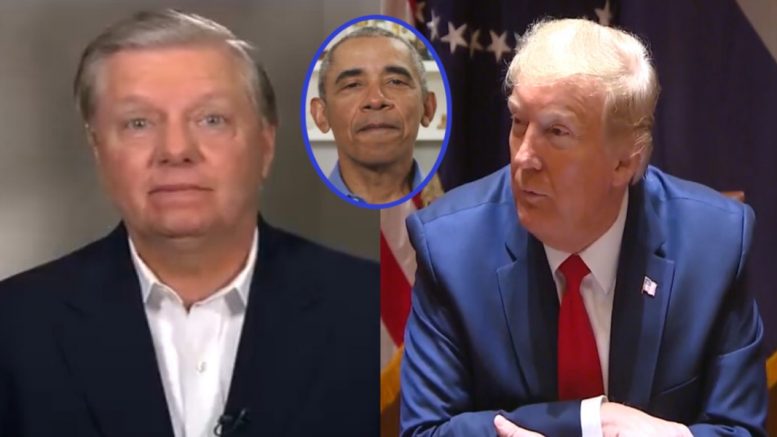 Senator Graham responded to the President’s tweet reportedly in a statement to Andrew Desiderio, a congressional reporter for Politico, saying, “I don’t think now’s the time for me to do that”.

The Commander in Chief tweeted Thursday in response to the unmasking revelations, writing: “If I were a Senator or Congressman, the first person I would call to testify about the biggest political crime and scandal in the history of the USA, by FAR, is former President Obama. He knew EVERYTHING.”

“Do it @LindseyGrahamSC, just do it. No more Mr. Nice Guy. No more talk!” President Trump expressed. Continued Below

Andrew Desiderio asked Senator Graham about President Trump’s tweet, and the Politico reporter said that the South Carolina Senator “reiterated that he’s not going to call in Obama” to testify and that he is “greatly concerned about the precedent that would be set by calling a former president for oversight.”

“I don’t think now’s the time for me to do that. I don’t know if that’s even possible.” Graham reportedly told Desiderio. “I understand President Trump’s frustration, but be careful what you wish for.”

“We do have oversight of it as Congress — appropriate oversight,” Graham said. “But hauling a former president before an oversight committee, I don’t think that’s been done before. And presidentially, I’d be careful what I wish for.” Continued Below

“No president is above the law,” Graham reportedly said in the statement. “However, the presidency has executive privilege claims against other branches of government. To say we are living in unusual times is an understatement.”

“As to the Judiciary Committee, both presidents are welcome to come before the committee and share their concerns about each other. If nothing else it would make for great television. However, I have great doubts about whether it would be wise for the country,” Senator Graham added.

Graham, though, said this week that he plans to call former senior Obama administration officials before his committee in early June regarding all things “Crossfire Hurricane”, as part of its investigation into the origins of the Russia probe, including a focus on the FBI’s probe of Flynn, President Trump’s former national security adviser. Video Below

Andrew Desiderio tweeted Senator Graham’s statement over his plans to call officials to testify in June and his statement on the president’s tweet:

Asked Graham about this tweet just now. He reiterated that he’s not going to call in Obama.

“I don’t think now’s the time for me to do that. I don’t know if that’s even possible.”

“I understand President Trump’s frustration, but be careful what you wish for.” https://t.co/B5LVPcznJR

And as @kyledcheney notes, Trump’s position on seeking Obama’s testimony directly conflicts with arguments put forward by his own Justice Department in its efforts to block Congress from interviewing his former White House counsel, Don McGahn.https://t.co/1tm4PVHhRn

Graham says both Trump and Obama are welcome to come before his committee. “If nothing else it would make for great television,” he said. “However, I have great doubts about whether it would be wise for the country.”https://t.co/1tm4PVHhRn

(Related: Rand Paul Calls For An Investigation In Wake Of Unmasking Bombshell: “Biden Was In This Up To His Eyeballs”)