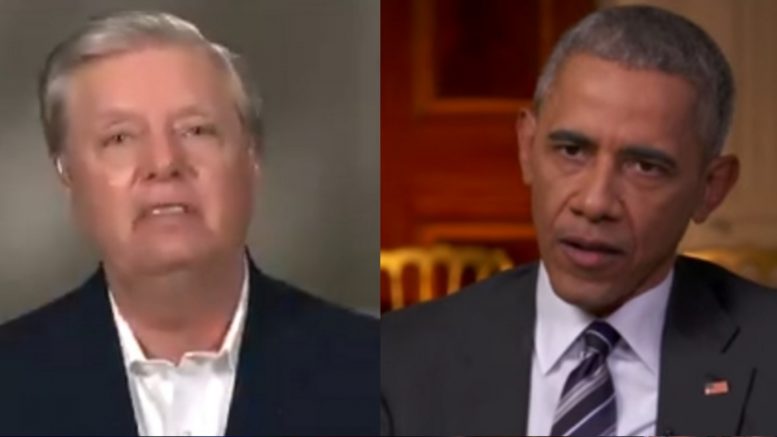 Senator Lindsey Graham is holding firm on his plan of not having former President Barack Obama testify during the Senate hearings that are scheduled to begin on June 3.

President Trump stated that if he had things his way, he would call Obama forward to answer questions during the hearings, which will focus on the investigation into Russian election interference and Trump’s campaign. Sen. Graham, however, has been hesitant to side with the president on the issue.

While speaking more about the topic with Judge Jeanine on Saturday Graham said he’s still “a little reluctant” to call Obama forward, but he looked at the camera and invited the former president to come to the Senate Judiciary Committee upon his own will if he has anything to address.

“President Obama, you’re welcome to come to Judiciary Committee and tell us why you think the General Flynn case should go forward. Why it’s a violation of the rule of law to drop it,” Graham said. “You’re welcome to tell us everything you did with Crossfire Hurricane and your knowledge.”

He continued, “But here’s what I would say. If Nadler and Schiff tried to subpoena President Trump to go to the House, the President would say no. All of us would be all over them.”

“Nobody’s above the law, including Barack Obama,” Sen. Graham declared. “If I find any evidence of criminal wrongdoing, I’ll turn it over to the prosecutor in this case — Mr. Durham from Connecticut.” Video Below

Related Article: Trey Gowdy On Trump’s Call To Have Obama Testify: “I Would Call Biden Before I’d Call President Obama”

“But, I’m a seperate branch of government. I’m in the Senate,” Graham went on to say. “I have oversight over the judicial branch, but there’s a serperation of powers issue here and in over 200 years, we’ve never had a President called before the Congress, probably for a reason.”

“But Barack Obama will be held accountable if he did anything wrong through the prosecution system, not the political system,” he concluded. Video Below

.@LindseyGrahamSC discusses the latest regarding the Flynn fiasco and reacts to my second opening monologue. Check it out. pic.twitter.com/tGiDmDB9i2