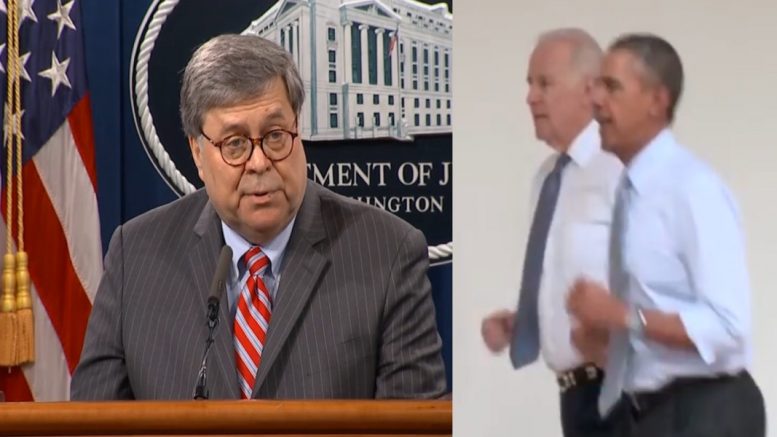 During a press conference Monday, Attorney General William Barr said that he does not expect U.S. Attorney John Durham’s review into the origins of the Russia probe will lead to a “criminal investigation” of either former President Barack Obama or former Vice President Joe Biden, noting that their concern of “potential criminality” in the conduct of that probe is “focused on others.”

Barr did, however, say that he has a “general idea” of how Durham’s investigation is going and confirmed that “some aspects are being investigated as potential crimes.”

“As for President Obama and Vice President Biden, whatever their level of involvement based on what I know, I don’t expect Durham’s work will lead to a criminal investigation of either man. Our concern of potential criminality is focused on others,” Attorney General Barr said.

Barr and the DOJ cited problems with the FBI’s interview with the Trump national security adviser in deciding to back away from the prosecution on the charge of lying to investigators. New documents, meanwhile, indicated Obama was at least aware of the details of Flynn’s intercepted December 2016 phone calls with then-Russian Ambassador Sergey Kislyak, that were a subject of that fateful interview. Then, a list was released of Obama-era officials involved in seeking to “unmask” what turned out to be Flynn’s name in intelligence reports, Fox News reported.

Both Biden and Obama’s chief of staff were among the officials involved in those requests, which was released last week. Biden submitted one of the “unmasking” requests on Jan. 12, 2017.

Durham’s investigation is said to have some overlap with a Justice Department inspector general’s investigation of the FBI’s Crossfire Hurricane probe. The IG found that the FBI made 17 “significant” errors and omissions in applications to obtain surveillance warrants against Carter Page, a former Trump aide. Continued Below

Meanwhile, the attorney general did make clear his thoughts toward the Russia investigation that ended up targeting a number of Trump associates.

“What happened to the president in 2016 election and throughout the first two years of his administration was abhorrent,” Barr said, adding that “it was a grave injustice and it was unprecedented.”

“We saw two different standards of justice emerge. … One that applied to Trump and his associates, and another that applied to everyone else,” Barr pointed out. “The Durham investigation is trying to get to the bottom of what happened.” Continued Below

Barr added that Durham’s investigation will “determine if there were any federal laws broken and if there were, those who broke the laws will be held to account.”

Though the attorney general expressed he’s concerned about potential wrongdoing during the Russia probe, he said that this process should not be a vehicle for retribution.

“This will not be and cannot be a tit-for-tat exercise,” he stated, noting that “the only way to break away from a dual system of justice” is to “ensure we scrupulously apply” the same system to both sides of the aisle.

Barr also said that, so long as he is attorney general “the criminal justice system will not be used for partisan, political ends,” adding: “We cannot allow this process to be hijacked by efforts to drum up criminal investigations of either candidate. … Any effort to pursue an investigation of either candidate has to be approved by me.” Video Below

“He got caught, OBAMAGATE!”, President Trump had tweeted after the Department of Justice dropped charges against General Michael Flynn.