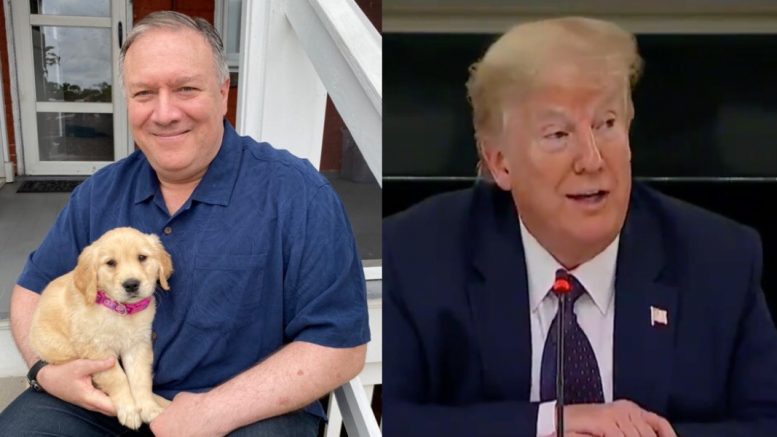 President Donald Trump reacted Monday over Secretary of State Mike Pompeo allegedly being under investigation for having a staffer “walk his dog”, asking a reporter, “Do you know how stupid that sounds to the world?”

Just days after State Department Inspector General Steve Linick was fired, media outlets are now reporting that he was looking into whether Secretary of State Mike Pompeo required a staffer to walk his dog, pick up his dry cleaning, and make dinner reservations, and other personal errands, The Daily Wire reported.

“The officials say the staffer who was alleged to have been made to do personal tasks is a political appointee who was serving as a staff assistant. CNN reported last year that congressional Democrats were investigating a different complaint, this one from a whistleblower, alleging that Pompeo’s diplomatic security agents were made to perform similar personal tasks,” NBC reported.

The president praised Pompeo, saying he was “number one at West Point” and “number one at Harvard or close”, adding: “They’re bothered because he’s having somebody walk his dog? … But this is what you get with the Democrats. Here’s a man supposed to be negotiating war and peace with major, major countries with weaponry like the world has never seen before. And the Democrats and the fake news media– they’re interested in a man who’s walking their dog?”

Trump suggested “maybe” Pompeo is “busy” and that “negotiating with Kim Jong Un about nuclear weapons”, adding that the Secretary of State may have asked them: “Sir, could you walk my dog? Do you mind walking my dog? I’m talking to Kim Jong Un. Or, I’m talking to President Xi about paying us for some of the damage they’ve caused to the world and to us. Please walk my dog.'”

“To who? A secret service person or someone, right? I don’t know, I think this country has a long way to go. The priorities are really screwed up when I read this,” the president expressed. Video Below

“Look, he’s a high-quality person, Mike. He’s a very brilliant guy. Now, I have you telling me about dog-walking, washing dishes. And you know what? I’d rather him on the phone with some world leader than have him wash dishes because maybe his wife is not there? Or his kids aren’t there? What are you telling me? It’s terrible. It’s so stupid. Do you know how stupid that sounds to the world? Unbelievable,” Trump told the reporter.

"Look, he's a high-quality person, Mike. He's a very brilliant guy. Now, I have you telling me about dog-walking, washing dishes … What are you telling me? It's terrible. It's so stupid. Do you know how stupid that sounds to the world? Unbelievable. pic.twitter.com/VMn7MzD5tN

“Introducing… Mercer” he tweeted. “She’s named after General Hugh Mercer, who fought in the Revolutionary War and was a close friend of George Washington. Also, my mother’s maiden name!”

She’s named after General Hugh Mercer, who fought in the Revolutionary War and was a close friend of George Washington. Also, my mother’s maiden name!