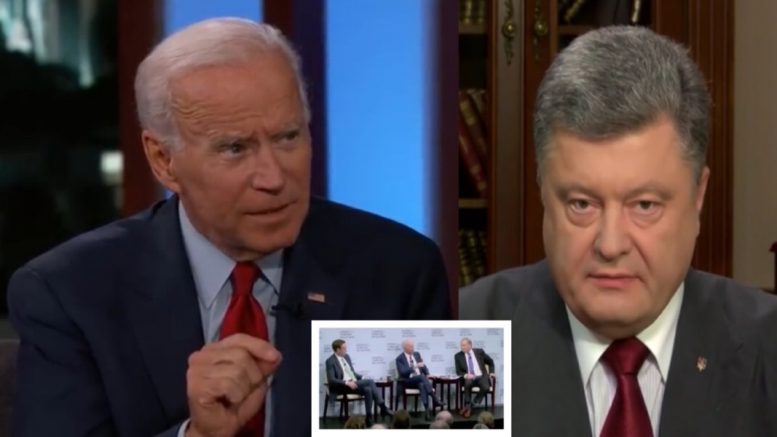 President Trump’s attorney Rudy Giuliani has raised several questions about the activities of former Vice President Joe Biden’s son Hunter, who worked for a Ukrainian gas company, Burisma. Giuliani told Chris Cuomo in an interview on CNN last September that Biden had “offered a 1.2 billion loan guarantee in return for him firing a prosecutor.”

In a video, Biden is heard during a council of foreign relations, “I had gotten a commitment from [former Ukrainian President Petro Oleksiyovych] Poroshenko and [Arseniy] Yatsenyuk that they would take action against the state prosecutor and they didn’t. So I said, ‘Nah, we’re not gonna give you the billion dollars.’ They said, ‘You don’t have authority, you’re not the President.’ I said, ‘Call him. You’re not getting the billion dollars if the prosecutor is not fired, you’re not getting the money.’ Well, son of a bitch! He got fired.”

On Tuesday, a leaked phone call from Feb. 18, 2016, was published on social media with Biden and Poroshenko, which purportedly shows a quid pro quo.

Poroshenko is heard telling Biden: “Yesterday I met with the General Prosecutor [Viktor] Shokin. And despite the fact that we didn’t have any corruption charges, we don’t have any information about him doing something wrong, I specially asked him … to resign– in his position as a state person.”

“And despite the fact that he has support in the power,” Poroshenko continued. “And as a finish with my meeting with him, he promised me to give me the statement on resignation. And one hour ago, he [brougt] me the written statement of his resignation.”

Biden responded: “Great,” which prompted Poroshenko to say, “This is my second step for keeping my promises.” Continued Below

Biden is later heard telling Poroshenko in the audio, “And I’m a man of my word. Now that the new prosecutor is in place, we’re ready to move forward to signing that new one billion dollar loan guarantee.”

The conversation goes on with Biden and Poroshenko discussing details of setting up an arrangement to complete the signing. Biden tells Poroshenko that he wants to get in contact with the Justice Department.

Poroshenko thanked Biden for “giving him his word” after he appointed a new prosecutor-general. “And it would be Yuriy Lutsenko as we agreed on our previous meeting in Washington. And when it happene[d], we can have this loan guarantee, and thank you very much,” he said. Video Below

“If the prosecutor’s not fired, you’re not getting the money.” pic.twitter.com/f4nBo5oIyX