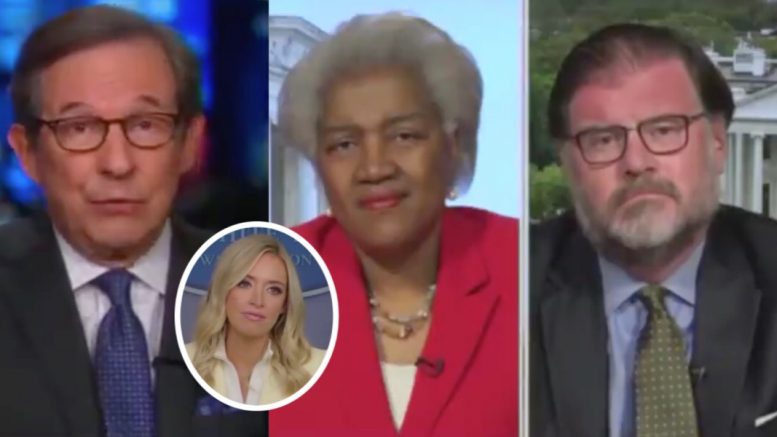 Wallace began by explaining that President Trump would “override governors if they didn’t open House of Worship right away”, then proceeded to show an exchange between McEnany and reporters.

Kayleigh McEnany had told reporters Friday that “the president will encourage governors to allow their churches to reopen. Boy, it’s interesting to be in a room that desperately wants to seem to see these churches and House of Worship stay closed.”

Chris Wallace responded to McEnany’s remarks saying: “I spent six years in the White House briefing room covering Ronald Reagan. I have to say, I never… I never saw a White House press secretary act like that.”

Fox News contributor Donna Brazile replied by calling McEnany an “extraordinary person” but said she’s not taking “the right posture” in her job, adding, “I would hope that she could tone it down a little bit.”

Wallace then went on to say that McEnany was “lecturing reporters” and “telling reporters what questions they should be asking, in this case about Michael Flynn”. Continued Below

McEnany brought visual aids to assist the White House Press corps in what questions she deemed they should be asking Barack Hussein Obama’s spokesperson, saying, “any good journalist” would want to see the questions answered.

“Did anyone pose any questions about Michael Flynn and unmasking to [former] President Obama’s spokesperson?” McEnany had asked on Friday, looking around the briefing room for a raised hand. “Oh, not a single journalist has posed that question?”

Wallace told the Sunday panel: “If Kayleigh McEnany had told Sam Donaldson and me what questions we should ask, that would not have gone well.” Continued Below

“There’s this cliche in Washington that President Trump wants Roy Cohn as DOJ, as attorney general. What Donald Trump wants in a press secretary is a Twitter troll, who goes on attack, doesn’t actually care about doing the job they have, and instead, wants to impress really an audience of one, and make another part of official Washington another one of these essentially cable news and Twitter gladiatorial arenas,” Goldberg claimed.

Wallace even went so far as to say, “Kayleigh McEnany isn’t acting like she’s working for the public. She acts like she is what she used to be, which is a spokesperson for the Trump campaign,” Mediaite noted.

On Thursday, President Trump tweeted: “Many will disagree, but @FoxNews is doing nothing to help Republicans, and me, get re-elected on November 3rd. Sure, there are some truly GREAT people on Fox, but you also have some real “garbage” littered all over the network, people like Dummy Juan Williams, Schumerite Chris Hahn, Richard Goodstein, Donna Brazile, Niel Cavuto, and many others.”

He added: “They repeat the worst of the Democrat speaking points, and lies. All of the good is totally nullified, and more. Net Result = BAD! CNN & MSDNC are all in for the Do Nothing Democrats! Fox WAS Great!” Video Below

Places of worship are ESSENTIAL.

President @realDonaldTrump reaffirmed his support for the First Amendment by announcing new @CDCgov guidance to allow churches, synagogues, mosques & other places of worship to re-open SAFELY.

This President stands with Americans of ALL faiths!

"I spent six years in the White House briefing room covering Ronald Reagan. I have to say, I never…I never saw a White House press secretary act like that." pic.twitter.com/o9K1LxROUV

This is the greatest takedown of the Media I’ve ever seen.
🤣🤣🤣🔥🔥🔥 pic.twitter.com/bmKAH6xZf8

On Sunday, President Trump retweeted a tweet from John Stahl:

I like the way Kayleigh sets the agenda. She doesn’t take any crap off these pathetic, worthless, clueless DNC Shills. I love how she finishes by posing the questions they should be asking and then walks off. #maga #tcot #kag pic.twitter.com/Vpk9N39Rhc