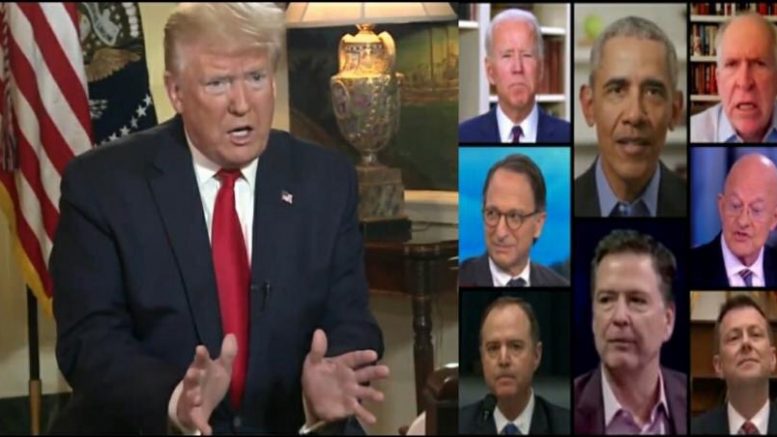 In an interview on Full Measure with investigative journalist Sharyl Attkisson, which aired Sunday, President Donald Trump said he has “a chance to break the deep state”, Washington’s permanent bureaucracy.

“A lot of alleged wrongdoing has been uncovered by FBI and intelligence officials, particularly lately. Until Richard Grenell was made the Acting Director of National Intelligence by you, reporters, members of Congress, members of the public had asked to see a lot of this information really for three years, but it was kept hidden. What do you make of that? Because it was kept hidden by people working for your administration,” Sharyl Attkisson said.

President Trump told Attkisson: “Richard Grenell is a superstar. He had guts, he had courage to do what he did. We have another superstar going in as you know, John Ratcliffe. He just got approved yesterday and he’ll be taken over as of Tuesday. Richard Grenell has done one of the best jobs I’ve ever seen. I mean, in a short period of time, he exposed them as being corrupt. Look, they were trying to do a takedown of the president of the United States illegally. It’s all illegal.”

“Now, I don’t know what happens. We hope Bill Barr is going to be as good as we think because Bill, he’s a great gentleman, a great man. He’s got to hopefully use that information and do what’s right. And he’ll do what’s right. Bill Barr will do what’s right, but what Richard Grenell has done for this country is incredible,” he continued.

“… When you look at what Richard Grenell has done in eight weeks, these people didn’t do anything for two and a half years,” the president said. “They should have been exposing this. So I’m very disappointed in certain people. And some people have done a phenomenal job, but what am I doing?”

“I’m fighting the deep state. I’m fighting the swamp. And I said I was doing it. And I’m exposing the swamp,” President Trump declared. “I think if it keeps going the way I’m going, and Ratcliffe is fantastic. If it keeps going the way it’s going, I have a chance to break the deep state. It’s a vicious group of people. It’s very bad for our country. And that’s never happened before.” Continued Below

“These are the two lovers, right? And they use public servers. They put it out public because they didn’t want anybody to see, like spouses, et cetera, to see that they were having an affair. And because they did that, they got caught. Tremendous things have happened. They forged documents. We caught them. They had people that had forged documents. I would like to see it move much faster. I’ll be honest with you,” the Commander in Chief said.

President @realDonaldTrump has kept his promise to fight the swamp and expose the deep state. pic.twitter.com/sJbyGSDvzK

(Related: Nunes On The Alleged Missing Flynn 302: “There’s Going To Be Holy Hell To Pay If That 302 Exists”)