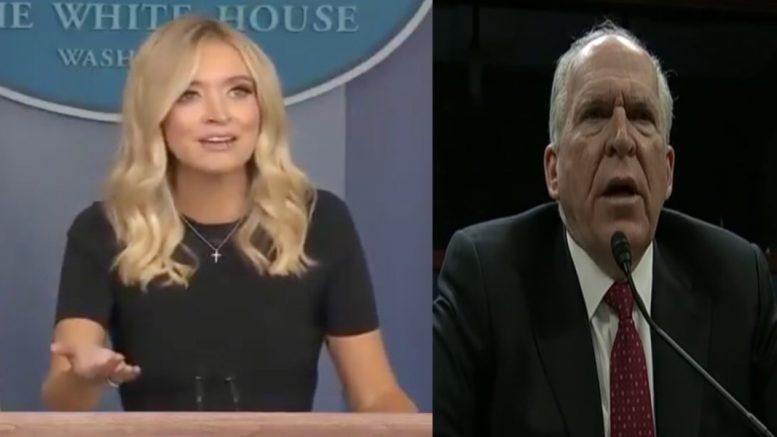 Tuesday during the White House press briefing, press secretary Kayleigh McEnany called former Director of National Intelligence John Brennan a “bad actor” and that he “probably has the most to answer” for, regarding the origins of the Russia probe.

OANN’s Chief White House Correspondent Chanel Rion asked the White House press secretary: “With regards to ex-CIA chief, John Brennan, how far or how willing are you able to go forward and say that he lied to the FBI or obstructed justice in the process of discussing Russia collusion in the Trump family?”

“And on that note, we now have new information showing that Obama himself used foreign intelligence to actually request surveillance on the 5th and 26th floor of Trump Tower. So, to what extent was John Brennan behind that, … can you share with us what you know?” Chanel Rion asked Kayleigh McEnany.

The press secretary responded: “John Brennan of all of the — I’ll call them bad actors because indeed they were of the Obama administration. John Brennan probably has the most to answer.”

She explained that Brennan “sat before Congress and said the Steele dossier, paid for by Hillary Clinton [and the] DNC– [that] document played no part of the role in opening the Russia probe”, adding: “When in fact, we know it did. … It was the emphasis, a testified before the FISA court for its truthfulness to spy on the Trump campaign.”

“So John Brennan of all people probably has more to answer, so do Samamath Power, and Susan Rice. These individuals admitted under oath they, in fact, spoke to foreign leaders and representatives of foreign leaders during their transition. But yet, somehow during the Trump transition, that was uncalled for what has been done all throughout history. It was uncalled for meriting unmasking, … cornering General Michael Flynn. All of these people have really legitimate questions to answer,” she said. Continued Below

“I think we’re slowing getting to the bottom of this, but it’s a real travesty and one of the biggest political scandals in modern history,” McEnany added.

According to the inspector general, the Steele dossier played a “central and essential role in the FBI’s and [Justice] Department’s decision to seek the FISA order.” Continued Below

Connecticut U.S. Attorney John Durham has been tasked by Attorney General William Barr to conduct a criminal investigation into the origins of the FBI’s Russia probe.

In 2017, John Brennan testified before the House Intelligence Committee and told then South Carolina Congressman Trey Gowdy, that the dossier had no influence on the Intelligence communities claim that Russia interfered in the 2016 election.

"John Brennan, of all of the I'll call them bad actors because indeed they were, of the Obama Administration — John Brennan probably has the most to answer." – @PressSec pic.twitter.com/uIGMtC7kj3

The FISA process was used, abused, and politicized under the Obama Administration to spy on the ⁦@realDonaldTrump⁩ campaign in 2016.

As we move forward, the President wants to ensure that this never happens to another innocent American – or political rival! pic.twitter.com/4MMqr8Qf7p

John Brennan on the Steele dossier:

(Related: John Brennan: “I Welcome The Opportunity To Talk With [Durham], I Have Nothing To Hide”)