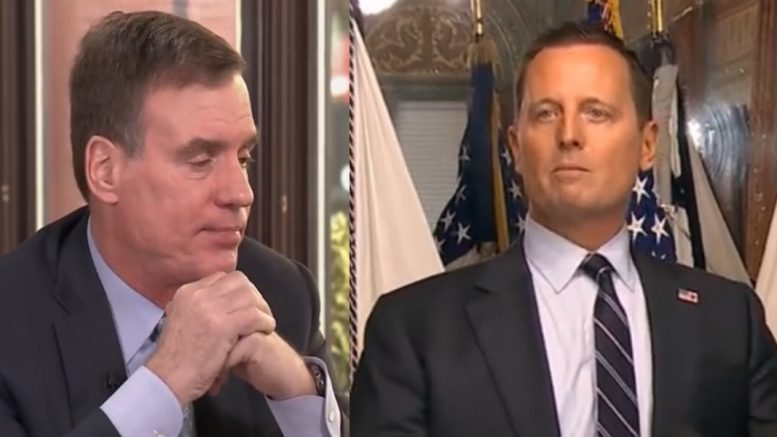 Warner asked Grenell for any underlying intelligence reports concerning conversations between Flynn and then-Russian Ambassador Sergei Kisltak, as well as the reasoning behind declassifying the unmasking requests, “given the potential compromise to sources and methods”, The Hill reported.

“As you are well aware, there are substantial protections built into the process for requesting that identities of U.S. persons be unmasked in intelligence reports, ensuring that the rights of individual Americans are protected and that unmasking requests are granted only to those who need the information in order to protect U.S. national security,” Senator Mark Warner wrote.

“[S]elective declassification for political purposes undermines the integrity of our system for protecting classified information, undermines the Intelligence Community’s credibility, and erodes public trust in institutions critical to protecting the nation,” he added.

Although the Senate panel typically operates on a bipartisan basis, Warner has no power on his own to compel Grenell to turn over the documents, reported The Hill.

On Tuesday, CBS News senior investigative correspondent Catherine Herridge obtained a letter showing Grenell’s response to Warner, to which she posted on Twitter. Continued Below

In his letter, Grenell wrote to Senator Warner: “As you well know, the decision to declassify the names of the individuals who sought to unmask the identity of General Flynn poses absolutely no risk of compromise of either source or methods. Additionally far from undermining the credibility of the Intelligence Community (IC), the utmost transparency in this matter builds public trust and confidence in the community and ensures the IC will not conceal potential abuse behind unnecessary security classification.”

“I find it puzzling that your letter initially complains about the declassification of the identities of unmaskers, a declassification that posed no conceivable risks to sources or methods, only to then request the declassification of actual intelligence reports. Cherry-picking certain documents for release, while attacking the release of others that don’t fit your political narrative, is part of the problem the American people have with Washington DC politicians. I would appreciate it if you would explain your philosophy on transparency as it appears to be based solely on political advantage,” Grenell explained.

“Lastly I should add, I gladly would have discussed this and other intelligence matters with you directly had you not chosen to cancel our planned call and then ignored subsequent requests by my office to reschedule,” he added. Continued Below

News: @MarkWarner asks Grenell to provide Senate Intel with “the underlying intelligence reports in which the identity of the individual was ‘unmasked’ to be” Flynn.

Also asks for rationale for declassifying the list Johnson/Grassley released.

…a declassification that posed no conceivable risks to sources or methods, only to then request the declassification of actual intelligence reports” #MyHighlighter @CBSNews pic.twitter.com/vWQ89qBW9w