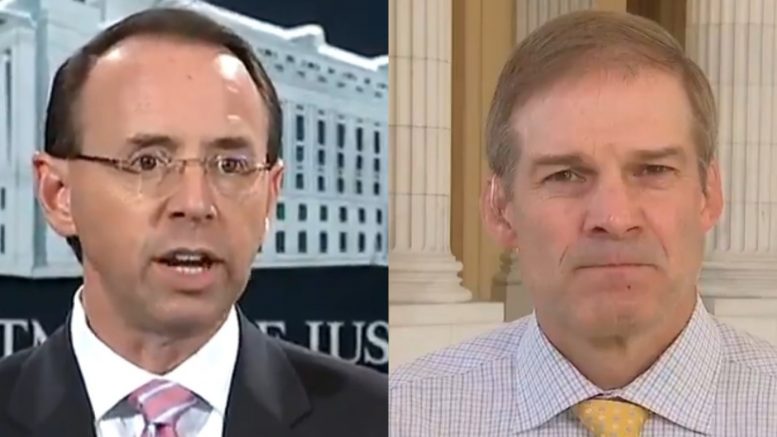 While appearing on Lou Dobbs Tonight, Congressman Jim Jordan weighed in on reports indicating that former Deputy Attorney General Rod Rosenstein agreed to testify on the first day of Senate hearings that are scheduled to begin on June 3.

The series of oversight hearings will focus on “all things Crossfire Hurricane and the Mueller investigation,” according to Senate Judiciary Chairman Lindsey Graham.

As reported by The Hill,

In response to the news, Rep. Jordan signaled his hope that Rosenstein will be pressed on the allegation that he was “looking to wear a wire to record” President Trump, and even floated the idea of invoking the 25th Amendment to remove Trump.

Jordan cited statements made by former FBI counsel James Baker during his deposition. Video Below

“And what they ultimately settled on doing, their course of action was to get Bob Mueller named as Special Counsel. And Jim Comey leaked his memos to create the momentum to get Bob Mueller as the Special Counsel,” he continued. “And two years later and 30 million dollars and all the subpoenas and everything else they did — they came back with what they already knew. There was nothing there.”

“So, yea I think Rod Rosenstein is a good person to bring in right away. And let’s find out about what he knows about wearing a wire and what he was doing about the 25th Amendment and these other issues that came up in that critical, critical time frame in May of ’17,” Jordan declared. Video Below

Rosenstein’s Role: @Jim_Jordan says it’s about time the American people hear directly from Rod Rosenstein about his plan to wear a wire in the White House and invoke the 25th amendment against @realDonaldTrump. #MAGA #AmericaFirst #Dobbs pic.twitter.com/kg8ybw9Pmb

Related Article: Sen. Graham: “If I Find Any Evidence Of Criminal Wrongdoing” By Obama “I’ll Turn It Over To The Prosecutor”