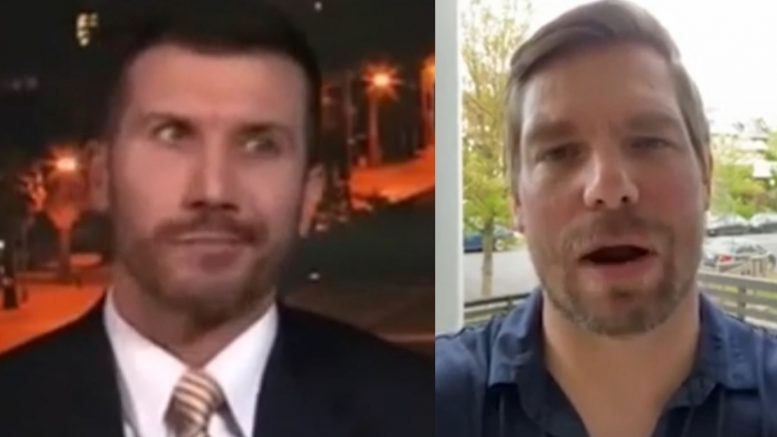 On Friday, transcripts of phone conversations that took place in December 2016 between then-national security adviser General Michael Flynn and then-Russian Ambassador Sergey Kislyak were released after years of being kept under wraps.

Flynn’s attorney, Sydney Powell said in a statement that the transcripts “prove there was no conceivable ‘Logan Act’ violation—nothing wrong at all with General Flynn’s conversations with the Ambassador.”

She then lashed out at those in the FBI, certain members of the DOJ, the Special Counsel Operation, and those in the House, Senate and elsewhere who “obstructed the release of the truth have all obstructed justice and put this man, his family, and the entire country through three years of hell—for their LIES and deceit.”

Prior to the extensive document release, Rep. Swalwell taunted former Acting DNI Richard Grenell in a series of Twitter posts, where he dared the official to declassify Flynn’s phone transcripts and make them public.

“If you have nothing to hide, why don’t you release Flynn’s call with Russia? #ShowUsTheTape,” Swalwell tweeted.

Grenell replied, “Those are coming. It’s very important for the public to see ALL of them. For too long the public has been misled. Just compare your committee’s transcripts to your public statements! #troubling.” Continued Below

Just days later, the pair had another heated back and forth after news broke that Grenell declassified the Flynn documents right before he was replaced by Ratcliffe, leaving it up to Ratcliffe to decide whether to release them.

“For years you went on TV spreading the Russian propaganda – knowing the entire time that not one single person under oath from your committee saw any collusion. Not one. It’s shameful!” Grenell said to Swalwell.  “You spent tens of millions of taxpayer dollars weaponizing the US government & telling Americans there was massive collusion. Your own committee interviewed more than 50 people under oath & they all said the same thing: they know of no collusion. But on TV you said the opposite…you lied about collusion. And Americans who see the facts that you tried to hide are furious.”

Wright retweeted Swalwell’s May 22nd post, where he taunted Grenell. He then captioned it, “Eric Swalwell dared @RichardGrenell to release the Flynn transcripts. And so he did (via DNI Ratcliffe).”

“We now see that Flynn was holding conversations w/ a Russian emissary exactly as we’d expect for his role,” he added “That makes Eric Swalwell the dumbest man in America.”

And so he did (via DNI Ratcliffe).

We now see that Flynn was holding conversations w/ a Russian emissary exactly as we’d expect for his role.

That makes Eric Swalwell the dumbest man in America. https://t.co/Al9b2ueNSK

To get the full run-down on what was contained in Flynn’s transcripts, CLICK HERE.

In ending here is Wright’s initial reaction to the newly released documents:

His sin was not a crime — there was no Logan Act violation for the inbound Nat’l Security Advisor.

The transcripts now prove that.

That was Team Obama’s outrage. https://t.co/LmOzp5x8p4