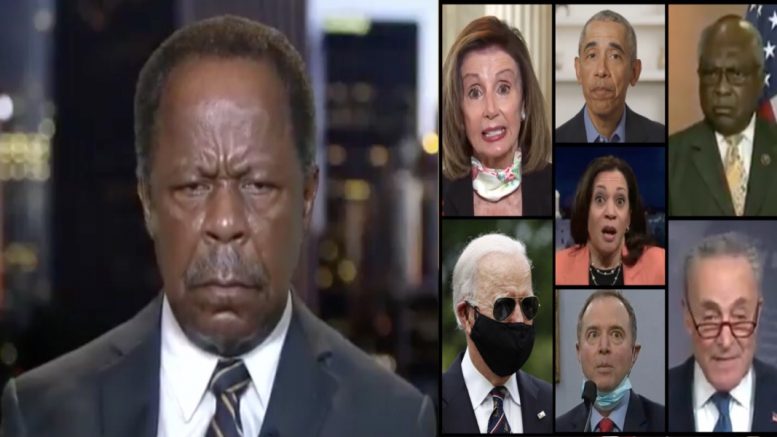 Democratic civil rights attorney Leo Terrell believes that Democratic lawmakers are not calling out the criminal activity during the protests against the death of George Floyd because they don’t want to alienate black voters ahead of the November presidential election.

During a Friday interview on “Hannity”, Terrell said Floyd’s death was a “tragedy” and there is a “universal acceptance” that his murder was wrong, but argued those who are protesting his death in cities like New York and Minneapolis are using Floyd’s death as an excuse to break the law.

“I am disappointed, shocked that there has been no Democratic lawmaker in the last 72 hours who have focused on the criminal activities of these individuals who are not protesting,” Terrell said. “These are criminals and they are breaking the law using the guise of caring about George Floyd.”

“And, I encourage all you Democratic lawmakers, all you lawmakers, to stand up and criticize these criminals,” he continued.

Floyd, a 46-year-old African-American, died earlier this month while being detained by Minneapolis police officers. In a now-viral video, officer Derek Chauvin is seen kneeling on Floyd’s neck for over eight minutes as Floyd called out for him to stop. Chauvin and the officers involved in Floyd’s death were fired from their department and Chauvin was arrested on Friday afternoon, Fox News reported.

“I have tremendous credibility as a civil rights attorney. I agree with Sean Hannity. I thank the president for spending prompt action of getting the attorney general involved in this and the county district attorney for filing charges,” Terrell said. “But, what cannot happen is this Democratic silence.” Continued Below

“And, let me just tell the truth why: because these Democratic lawmakers do not want to alienate black voters,” Terrell suggested.

“I’ve got news for you: you’re alienating me. I’m a black voter and you have lost me, if you don’t stand up and do something about these criminals,” he added.

In Louisville, Ky., at least seven people were shot on Thursday after between 500 and 600 protesters took to the streets over the fatal shooting of 26-year-old EMT Breonna Taylor. Police in St. Paul, Minn. reported that between Thursday night and Friday morning, more than 170 businesses had been looted or damaged in the tumult, per Fox News. Video Below

[They] lost the black vote. Just don't realize it yet.
Never thought I would hear this guy actually thank the President. pic.twitter.com/dqcj9IIHjb

Here are few scenes from Atlanta, Georgia on Friday:

Meanwhile at CNN HQ – the peaceful protesters who just want want to end racism in America threw a small explosive inside the building, as they are trying to break inside. pic.twitter.com/BhljFZvfZe

Police cars getting literally destroyed in Atlanta outside the CNN Center pic.twitter.com/x5zRxZVQpb