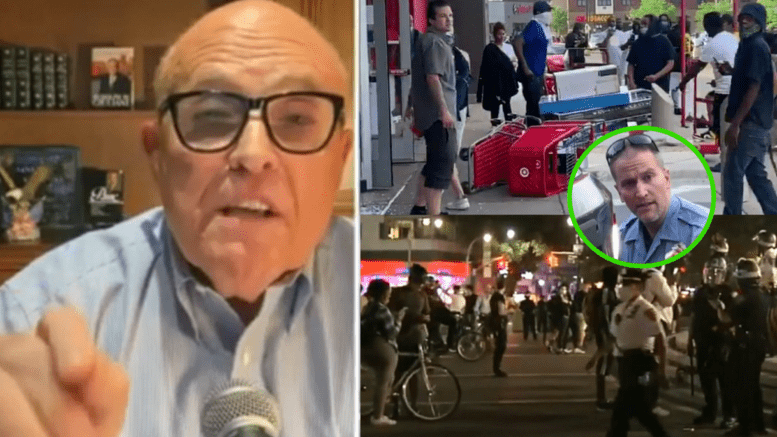 On Sunday, former New York City mayor Rudy Giuliani blasted “cities run by progressives” for not knowing “how to police.”

Rudy blamed poorly trained officers and an overall inept police system in such cities for why George Floyd died in the hands of law enforcement and for the nationwide riots that have taken place as a result.

“30 cities went up last night. I went and looked at every one of them. Every one of them has a progressive Democratic mayor,” he added. “This would not have happened when I was the mayor of New York City.”

“It should not happen because this is not a protest for Mr. Floyd. This is a desecration of Mr. Floyd’s memory,” Rudy said.

Related Article: Leo Terrell To Dem Lawmakers: “You’re Alienating Me. I’m A Black Voter & You Have Lost Me, If You Don’t Stand Up & Do Something About These Criminals”

“People don’t steal liquor, break into liquor stores and walk out with [bottles] — I watched that last night in Minnesota,” he continued. “You are demonstrating to Mr. Floyd and you’re getting liquor to get yourself drunk, or to sell it? You don’t steal bicycles, you don’t steal televisions.”

“These people are doing so much damage to us, it’s really, really horrifying. We gotta reject this,” Giuliani concluded. Video Below

In ending, here is a tweet posted by Fox News host Greg Gutfeld that coincides with what Rudy implied:

as protesters march on Trump Tower in Chicago & the White House, a frank media might point out the death of Mr.Floyd happened under a democrat mayor, democrat senator, democrat governor, with a democrat county prosecutor. the only person who did shit was a republican. Trump.