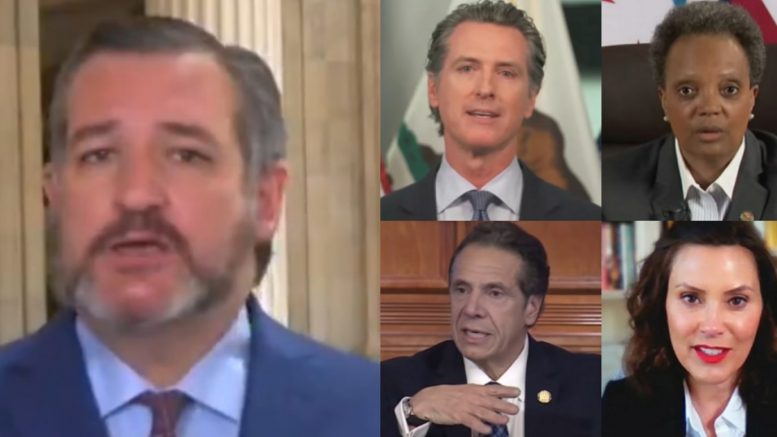 On Tuesday, Senator Ted Cruz (R-TX) slammed Democrats’ hypocritical leadership exhibited on the coronavirus pandemic versus nationwide riots and looting that have been going on since Minneapolis resident George Floyd died last week.

Cruz pointed out how Democratic “authoritarian” leaders were motivated to arrest anyone who doesn’t follow social distancing guidelines. However, now that real violent, criminal activity is rocking the nation, the same leaders are suddenly taking a different stance on enforcing the law.

While interviewing with Fox News host Harris Faulkner, Sen. Cruz said, “Isn’t it interesting…that all of these authoritarian Democratic local leaders who were eager to send in law enforcement to arrest people at churches or to try to target a dad playing softball with a 6-year-old daughter — suddenly, when it comes to violent protesters looting, robbing, breaking windows, stealing, burning police cars — suddenly these Democratic-elected office holders, too many of them, are deciding it’s bad politics to enforce the law.”

He continued, “Every one of them needs to protect our American cities, our American people. What’s happening here is wrong.”

As an example to back up his claim, Sen. Cruz referenced Minneapolis City Councilman Jeremiah Ellison, who recently pledged support for the far-left group Antifa, instead of condemning their alleged acts of violence after President Trump said they will be designated as a “terrorist organization.”

Jeremiah Ellison is the son of Minnesota Attorney General Keith Ellison, who once posed with an Antifa book while serving as a U.S. Congressman.

“There are a lot of Democratic politicians, including the City Councilman who tweeted that he supported Antifa. Antifa is literally burning his city,” Cruz said. “Stop playing politics with people’s lives.” Video Below

Democrats were eager to to arrest families in parks a few weeks ago but are now too cowardly to arrest violent rioters taking over their cities?@SenTedCruz is right: Democrats must stop playing politics with peoples lives. Follow @RealDonaldTrump’s lead and keep America safe! pic.twitter.com/7VTNLrIjNF