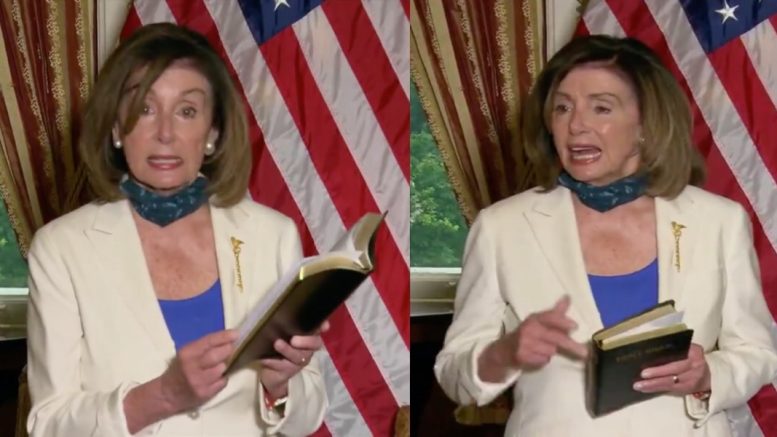 On Monday, President Donald Trump apparently was on a mission to visit the historic St. John’s Church, which was set ablaze on Sunday evening. Moments later, he was spotted in front of St. John’s, where the Commander in Chief held up a Bible.

House Speaker Nancy Pelosi (D-CA) released a statement shortly after, criticizing the president after he made the stunning decision to walk through the White House gates and to the epicenter where DC protests had been taking place.

“Yet, at a time when our country cries out for unification, this President is ripping it apart. Tear-gassing peaceful protestors without provocation just so that the President could pose for photos outside a church dishonors every value that faith teaches us,” Pelosi claimed in part, in her statement.

After the President was seen at St. John’s Church Monday with a Bible, Speaker Pelosi on Tuesday, opened up a Bible and quoted Biblical scripture to help criticize President Trump’s response to the riots.

“Last night when I saw the president hold up a the Bible, I was thinking of so many things in the Bible that would have been appropriate, in terms of the humanity of all people in our country. … I was thinking of the book of Ecclesiastes. And in it, they talk about how there’s an appointed time for everything– in Ecclesiastes 3:1-8, the time for every event under Heaven. It talks about a time to heal. It talks about a time to embrace and time to shun embracing. How bout’ that?” she asked. “A time for peace.”

“We would hope that the president of the United States would follow the lead of so many other presidents before him to be a healer-in-chief, and not a fanner of the flame,” Pelosi said. Continued Below

“Yesterday we saw a most unfortunate situation, where before the curfew, the time of the curfew occurred, peaceful demonstrators… in front of the White House, were beaten. Some people came out and beat them, so that they could clear the area, so the president could come out and go forward,” Pelosi falsely claimed.

To clear the area around St. John’s, including the expansive Lafayette Square Park, federal law enforcers used tear gas and smoke bombs, sending demonstrators scurrying out of the park, reported The Hill. (*See update below)

The National Guard had been instructed to clear the area around the White House so the president could walk across the street to St. John’s Church, which had been set on fire by vandals the night before. Video Below

Mollie Hemingway at The Federalist reported, “Every single major media outlet falsely reported that Park Police were unprovoked when they used ‘tear gas’ to clear the area.”

After thousands of false tweets, print stories, and broadcast stories to the contrary, local journalist Neal Augenstein of WTOP reported that a Park Police source said ‘tear gas was never used — instead smoke canisters were deployed, which don’t have an uncomfortable irritant in them,'” per The Federalist.

“Media Falsely Claimed Violent Riots Were Peaceful And That Tear Gas Was Used Against Rioters” https://t.co/oAXU6WMQPf

“The entire narrative the media glommed onto in lockstep was that Trump was a monster who tear-gassed peaceful protesters to do something meaningless. None of that was true. But it took a day of reporting to get the truth out, long after the lie took hold. At times it seems as if there is nothing that many in the media won’t lie about to accomplish their political goals,” Hemingway wrote.

(Related: Leo Terrell To Dem Lawmakers: “You’re Alienating Me. I’m A Black Voter & You Have Lost Me, If You Don’t Stand Up & Do Something About These Criminals”)