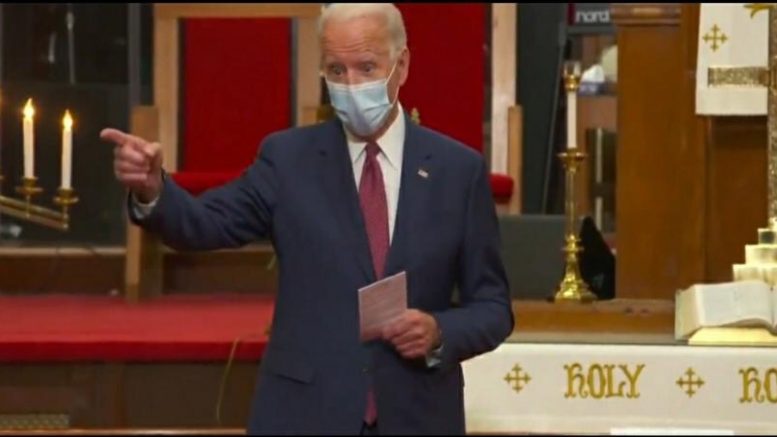 In an address to black community leaders, Biden suggested that cops, facing a knife-wielding attacker, should be trained to “shoot ‘em in the leg, instead of the heart”.

“And the idea of someone standing there and teaching a cop who is an unarmed person coming at ’em with a knife or something, shoot ’em in the leg, instead of the heart is a very different thing,” Biden suggested while speaking at Church. “There are a lot of things that can change.”

Biden today on police training: "Instead of standing there and teaching a cop when there's an unarmed person comin' at 'em with a knife or something to shoot 'em in the leg instead of the heart is a very different thing." pic.twitter.com/2xgqvlQtJ2

“Former VP Biden’s remark is not just indecipherable (‘an unarmed person coming at ’em with a knife’?!), it’s also misleading to the point of being deceitful,” Bill Johnson, the executive director of the National Association of Police Organizations, told Fox News in an email.

“Officers are not trained to ‘shoot somebody in the heart’ as Biden says, but rather to aim for the biggest part of the body, so as to be most likely to hit the person presenting the threat and not hit anybody else,” he said.

“This always includes the condition that the officer or somebody else is in peril of death or great bodily harm, and certainly someone charging at you with a knife satisfies that requirement,” Johnson added. Continued Below

On Tuesday, President Donald Trump slammed Biden on Twitter saying he “has been politically weak all of his life”.

Sleepy Joe has been in politics for 40 years, and did nothing. Now he pretends to have the answers. He doesn’t even know the questions. Weakness will never beat anarchists, looters or thugs, and Joe has been politically weak all of his life. LAW & ORDER!

Twitterverse also responded to Joe Biden’s “shoot ’em in the leg” remark; we leave you with a few remarks:

Someone needs to explain to mass incarceration enthusiast Joe “Shoot Em In The Leg” Biden that protesters are not the same as rioters. https://t.co/Vp7oRGm7dT

As a former cop this is the dumbest comment ever. A gun battle lasts 3 sec, all fine motor skills are gone. You shoot for center mass , there is no time for such insane targeting. ⁦@JoeBiden you should hit the street and show us how it’s done. ⁩https://t.co/wRzhI9cbGW

Imagine if @realDonaldTrump said this. https://t.co/zpNh0afAp4

.@JoeBiden, this might be the all-time stupidest thing I have ever heard.

Shoot them in the leg?

I mean, do you have any clue how ridiculous you sound?

Joe “shoot them in the leg” Biden also advises moms against gun violence to use a shotgun for protection.

Joe “shoot them in the leg” Biden in 2013: "If you want to protect yourself, get a double-barrelled shotgun… as I told my wife… if there’s ever a problem just walk out on the balcony here & fire two blasts outside the house. …Buy a shotgun."