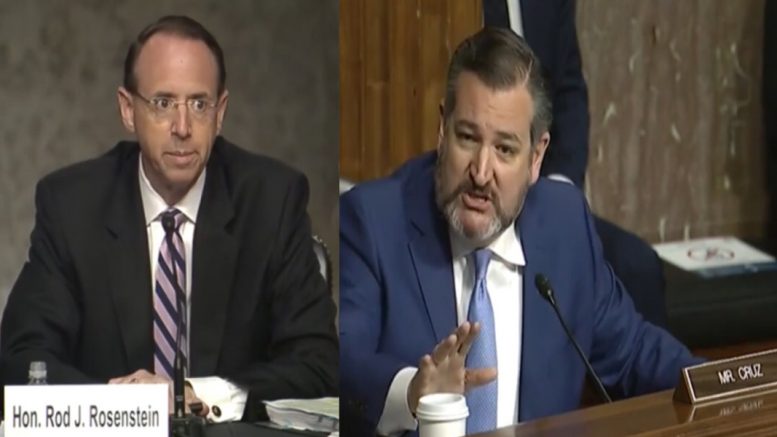 Former Deputy Attorney General Rod Rosenstein testified before the Senate Judiciary Committee on Wednesday pertaining to his oversight of the Russia investigation.

While being questioned, Senator Ted Cruz (R-TX) wondered why Rosenstein allowed a “pile of partisan lies to consume the country for years” under his leadership, adding that the “the Obama administration targeted its political opponents.”

He went on to say that the “evidence has made clear that the Obama administration targeted his political opponents, targeted President Trump and his campaign, unleashed, weaponized, and politicized the Department of Justice, the FBI, and the intelligence community, and that the decision to do so went right up to the very top.”

Senator Cruz pointed out that the FBI concluded on January 4, 2017, General Michael Flynn was ‘no longer a viable candidate to be part of this larger case’, adding, “Their investigation did no yield any information in which to predicate further investigative efforts. The FBI is closing this investigation. That was January 4, 2017.”

“The next day, James Comey, the Director of the FBI is sitting in the Oval Office with Barack Obama, with Joe Biden. And James Comey, according to a memo from Susan Rice, one of the most remarkable CYA written in Washington, written her last day in office, and even emailed to herself, saying, ‘By the way, this investigation into the national security advisor coming in to the new office, the president said do it by the book,'” he said. Continued Below

He went on to tell the former Deputy Attorney General: “That’s the world you came into, Mr. Rosenstein. That the Department of Justice you came into, where it had been corrupted and politicized”.

“Mr. Rosenstein, on May 17 you appointed Bob Mueller the special counsel. On June 29, you signed the third FISA application, on August 2nd, you signed the second scope application. You came into a profoundly politicized world, and yet, all of this was allowed to go forward under your leadership,” the Texas Senator said. Continued Below

“That unfortunately leads to only two possible conclusions: either that you were complicit in the wrong doing, which I don’t believe was the case, or that your performance of your duties was grossly negligence. Was there any more important case at the Department of Justice had into the investigation into whether the President of the Untied States is a Russian asset colluding against the United States?”

Rosenstein told Cruz that is the way the Texas Senator is “categorizing the investigation”, but viewed this investigation as “the most important”.

Cruz grilled Rosenstein over whether he “read the FISA application” before signing off on it, and asked whether he knew that the sub-source had told the FBI that it was unverified. Rosenstein told the Texas Senator: “At the time I reviewed it, and I’m not sure I read every word of it. I certainly reviewed it, and no, I did not know that.”

Rosenstein also said he did not know there was exculpatory evidence omitted from the FISA application. He didn’t know a lawyer on his staff had fraudulently altered material as a basis for the application, and he claimed he didn’t know that the Steele dossier was paid for by the DNC. He also didn’t ask. Video Below

“You were the acting attorney general and had a responsibility not to allow political targeting. … Why did you not laugh this out of the room, and why didn’t you get to answers on this? Why did you let this pile of partisan lies consume the country for years?” Cruz asked referring to the Obama admin targeting Flynn for the Logan Act when there was no Russian collusion.

Rosenstein claimed his general understanding was that Flynn had “lied to the vice president and to FBI agents, and that I believe was the primary issue that was under investigation at the time. I didn’t know all the background that appears in the pleading that was filed by U.S. attorney in D.C. … I devoted more to this case, but I still didn’t know everything.”