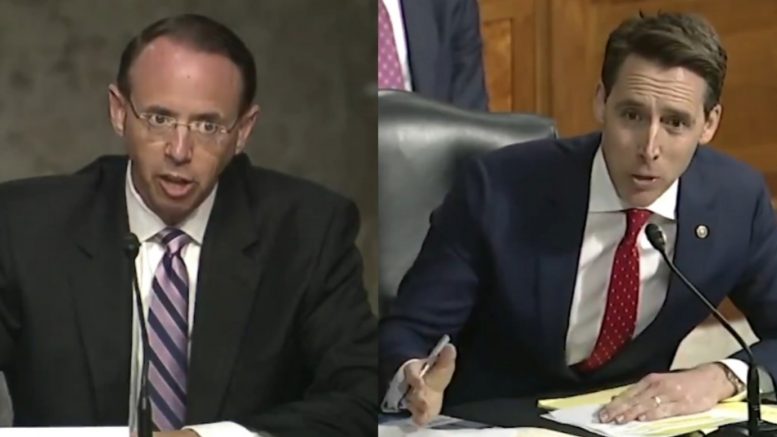 Senator Josh Hawley appeared to catch Rod Rosenstein in a conundrum regarding signing a FISA application that was ultimately approved to be used to surveil President Trump’s campaign.

The application was later found to contain “17 material misstatements, falsehoods and ommissions.” Hawley grilled Rosenstein on why he would have signed something to be used against the President of the United States that clearly lacked credibility.

“How could you sign off on something with this
number of misrepresentations that the FISA court later came back and said, ‘This destroys our trust in the FBI. You signed off on it personally. How could this happen?” Sen. Hawley asked.

Rosenstein confirmed that he signed off on the application, as did four federal judges because “they believed that the information had been verified and was accurate,” and that it was the duty of the agents involved in the investigation to verify the accuracy of
information used.

“So, you did not have a duty to verify the information?” Hawley asked. “It is your name on the application.”

“Well, I had a duty to ensure it had been verified,” Rosenstein replied.

After Rosenstein denied making the statements, Hawley replied, “Would you like us to read your testimony back to you? You said, ‘I can’t say that I read it. I don’t think that I read every page.”

“Yes, I did say that,” Rosenstein confirmed.

Related Article: Cruz To Rosenstein: Either You Were Complicit In A Coup Attempt Or You Were Grossly Negligent. Which One Was It?

Rosenstein wanted to explain “the process,” but Hawley cut in and said, “Oh, I think we’re familiar with the process. The OIG gave us the process. By the time it got you, you had 17 critical errors, falsehoods, ommissions, leading a federal court to say they have never seen anything like this and they can’t trust anything else the FBI says — and you signed off on it.” Video Below

Here is video of the full interaction between Hawley and Rosenstein: