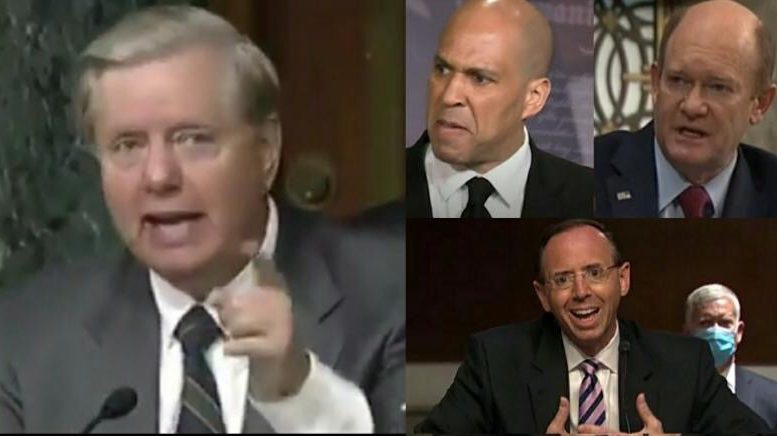 On Thursday, Senate Judiciary Committee Chairman Lindsey Graham (R-SC) postponed a vote to authorize subpoenas for more than 50 individuals pertaining the committees investigation into the Russia probe. The vote will take place next week.

Graham though, ripped the Democrats on the committee for not caring about FISA abuse, and said that there are “real good candidates for going to jail” pertaining to those who were involved.

“We’re going to do what this committee needs to do, and we’re going to fight it out and we’re going to vote. And we’re not going to be done today, so I don’t see a resolution this day, if you need to go somewhere go. … I think the best thing for us to do is [to] carry this over to next week so we can have a full discussion,” Senator Graham said.

He added that “we’ll get to [a] conclusion next week” on the subpoena vote.

The Senate Judiciary Committee Chairman’s decision came after Senator Ben Sasse complained that “committees are about people trolling for soundbites”.

“Can we get a sense of how long we’re going to be here?” Senator Ben Sasse (R-NE) asked. “With all due respect, I don’t think anybody in private ever disagrees with me when I say that it’s bullshit the way people grandstand for cameras in here. The reality is if we didn’t have cameras in this room, the discussion would be different.” Continued Below

Sasse added that “90 percent of our committees are about people trolling for soundbites.”

When Sasse added that his criticism was aimed at members on both sides of the aisle, Graham added: “I don’t think I’m trolling for a soundbite, I’m trying to defend what I think we need to be doing as chairman. …I find the whole concept offensive. … If you’ve got to go somewhere else go.” Continued Below

Meanwhile, the chairman told the committee: “Once we find out the Mueller investigation was run by people who hated Trump’s guts, dripping with partisanship, nobody seems to care. … It matters to me whether the number two guy at the FBI, Comey, himself, knew the [dossier] was no longer reliable and kept using it [to obtain FISA warrants]. And you can’t answer that question. None of you can. But i’m gonna get the answer to that question.

“Ya’ll could care less. This really says a lot, I think, not good about this committee. But having said that, we’re gonna go where the evidence takes us, and I’m gonna try to answer some basic questions about how it got so off the rails, and try to explain to the public why the FISA court was so upset,” he explained.

Graham noted that people went to jail during the Mueller investigation and said “there are some people that are real good candidates for going to jail for manipulating the FISA application process and abusing the rule of law.”

“We’re okay to turn the Republican nominee’s life upside down, and when you find out there was abuses in that system, not to ask questions how that happened, and make sure it never happens again to anybody– we’re gonna keep pressing. … I’d be an idiot to believe you’re gonna help me, you’re not. And you can fight, but off we go,” Graham added. Video Below

Sen. Lindsey Graham: "You think I am in Trump's pocket." pic.twitter.com/J9lpf1stdB