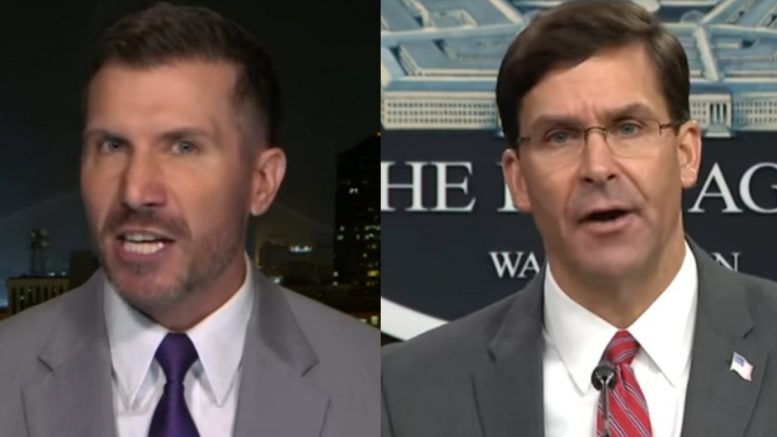 On Thursday, former CIA Officer Bryan Dean Wright put Secretary of Defense Mark Esper on full blast over him pushing back against President Trump’s consideration of invoking the Insurrection Act to help put an end to nationwide riots and looting.

As reported by The Hill, The president announced Monday that he would mobilize “all available federal resources, civilian and military, to stop the rioting and looting, to end the destruction and arson and to protect the rights of law-abiding Americans, including your Second Amendment rights.” Just days later, however, Secretary Esper publicly declared that using the military should only be used as a “last resort” as he publicly voiced opposition to Trump’s consideration.

“As a former soldier and a former member of the National Guard, the option to use active-duty forces in a law enforcement role should only be used as a matter of last resort and only in the most urgent and dire of situations,” Esper said during Wednesday’s press conference. “We are not in one of those situations now. I do not support invoking the Insurrection Act.”

In reference to Esper’s opinion on the matter, Bryan Dean Wright told Tucker Carlson that the Secretary of Defense “doesn’t get it” that America “is on fire right now.”

“We are facing an insurrection by people that we don’t quite understand who they are,” Wright declared. “By all indications, they are violent leftist thugs, and what Secretary Esper can’t quite seem to get either is that the nation is panicking.”

After going over stats that show majority of Americans want the National Guard and the military “in our cities tonight”, Wright said America is on the brink of being under “vigilante justice.”

“It’s you and me and everybody arming ourselves. Is that how we run a republic? No sir, it is not! And you do not want a country that goes there. And that is precisely where the nation is headed and we need for all of our leadership to understand that,” the former CIA officer proclaimed.

He continued, “And if Secretary Esper doesn’t get it — doesn’t understand that the oath is to protect ourselves from threats, foreign and domestic, by God get the hell out of the Pentagon, and let somebody lead who gets it. Because that is the oath that he took, that I took and that the people of this country demand of our leadership in this moment because we are on fire.”

“Someone do something about it,” Wright concluded. Video Below