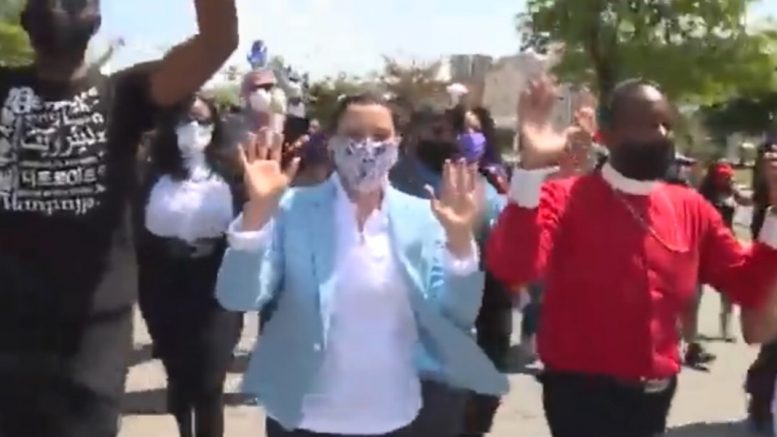 Tiffany Brown, a spokeswoman for Gretchen Whitmer told reporters that the Michigan Democratic Governor didn’t violate her own social distancing guidelines when she joined demonstrators this week because the Constitution gives her the right to “peaceful protest”.

Whitmer was spotted Thursday walking closely and kneeling alongside protesters in the wake of nationwide protests after the death of George Floyd.

“Social distancing is critical to stop the spread of COVID-19 — unless you have a great photo op,” state Rep. Lynn Afenoudlis, R-Grand Rapids Township, tweeted.

Social distancing is critical to stop the spread of COVID-19—unless you have a great photo op. ⁦And control. pic.twitter.com/uFyM6gBWaM

In May, Gov. Whitmer called protestors in her state, during the coronavirus lock down, “racist and misogynistic”.

She had also said the protests will make it “likelier” that residents will have to stay home for longer to prevent the spread of coronavirus.

On Sunday, Michigan announced 513 new confirmed cases of the coronavirus, as well as an additional 28 deaths. Michigan has had a total of 57,397 cases and 5,491 deaths since the start of the pandemic. On Friday, Whitmer annnounced lifting more restrictions in parts of the state, moving two regions to the fifth phase of her six-part coronavirus (COVID-19) reopening plan, starting next week, Click On Detroit reported. Video Below

This is Gretchen Whitmer.
She threw Michigan residents in jail and stripped them of their livelihoods if they did not “social distance.”
She called a group of peaceful protesters “terrorists.”
In case you were still wondering if the lockdowns were a vicious hoax to hurt Americans pic.twitter.com/PoOnuQFAke