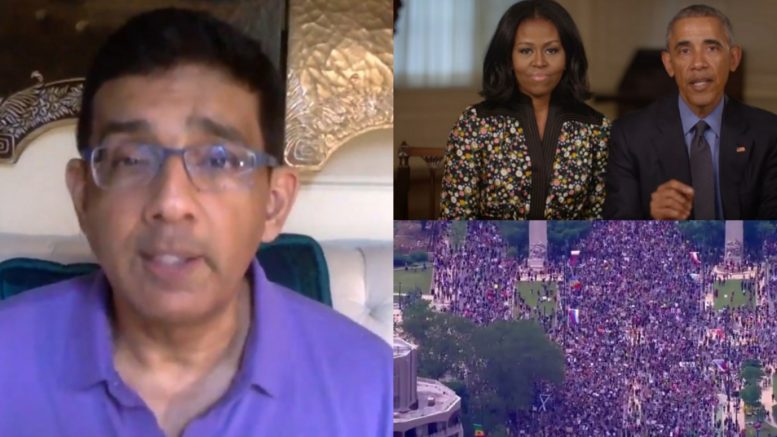 On Saturday, Dinesh D’Souza tweeted “two telling indications” that suggest progressive Democrats have a hard time following and believing their very own stance on issues.

The post by D’Souza came in wake of some of the most massive protests seen around America since the death of Minneapolis resident George Floyd.

Prior to the nationwide demonstrations, Democratic leaders threatened to punish those who failed to comply with strict social distancing guidelines, while left-leaning media sources and the progressive base parroted the same notion. However, their entire stance appears to have shifted dramatically as thousands of people have been allowed to congregate in Democrat-controlled districts to protest, as seen in the following viral video uploaded by NBC Philadelphia on Saturday:

Libs will still tell you to this day that it’s unsafe for us to church.

America has been lied to.

You should be furious.

“Their actions belie their words!” he added.

In 2019, Barack and Michelle Obama purchased a multi-million dollar home on Martha’s Vineyard, which sits on 29.3 secluded acres fronting the Edgartown Great Pond between Slough Cove and Turkeyland Cove, with views of a barrier beach and the ocean beyond, according to Vineyard Gazette.

It was quite an ironic purchase by the Obamas, to say the least, especially since Mr. Obama is a strong advocate against climate change and even warned back in 2009 that “rising sea levels threaten every coastline.”

“During his first address to the United Nations, in 2009, former President Barack Obama warned that ‘no nation, however large or small, wealthy or poor, can escape the impact of climate change.’ He told the General Assembly that ‘rising sea levels threaten every coastline’ and ‘on shrinking islands, families are already being forced to flee their homes as climate refugees.'”

In terms of COVID-19, some of the same “health experts” who warned about the dangers of close person to person contact all of a sudden took a completely opposite position now that George Floyd protests are underway.

Here is Greg Gutfeld’s reaction to the sudden turn of events:

the division made in this statement below preserves the elite's power. if u could go out, as well as their approved factions, what happens? both sides merge; we then realize its not white vs. black – its you vs. the elites. which is why they prefer us fighting each other. https://t.co/G3qZfEnyMG

In ending, here is video of Dinesh giving a quick rundown of how “identity socialism” has taken over the Democratic Party:

The new politics of the Left could accurately be called "identity socialism," and it has taken over the Democratic Party.

Next Tuesday I'll be hosting a LIVE Q&A on Instagram about how we can stop it.

Related Article: Whitmer’s Spox On Why Joining Protestors Didn’t Violate Her Own Social Distancing Guidelines: The Constitution Gives The Right To ‘Peacefully Protest’