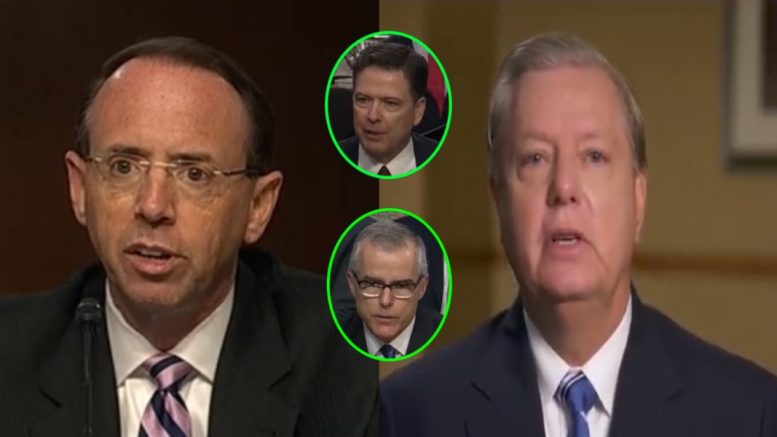 Upon grilling Rod Rosenstein, the former deputy attorney general told Senator Graham he did not know at the time the sub-source told the FBI that the Steele dossier was a bunch of “garbage and bar talk”.

“I was pretty stunned when Rosenstein said, ‘I signed the [FISA] warrant, but I did not know anything about the underlying documentation being altered. And I did not know that the central document to get the warrant, the Steele dossier, had been disavowed in January,'” Senator Graham explained.

He continued: “Because if anybody signs this warrant application knowing that the Russian sub-source disavowed the reliability of the Steele dossier, and that the Department of the State lawyer altered an email– if they knew that, they’d be going to jail themselves.”

Senator Graham said he is going to call Andrew McCabe, the former Deputy Director of the FBI, to his committee, saying: “I find it hard to believe that McCabe and [James] Comey did not know that the Russian sub-source told the FBI in January, ‘Oh by the way, the document you’re using to get a warrant against Carter Page, the Steele dossier, is a bunch of hearsay, bar talk, and garbage’. That’s why they will eventually be called before the committee”.

McCabe fired back after Wednesday’s hearing, essentially accusing Rosenstein of lying. “Mr. Rosenstein’s claims to have been mislead by me, or anyone from the FBI, regarding our concerns about President Trump and the campaign’s interactions with Russia, are completely false. Mr. Rosenstein approved of and suggested ways to enhance our investigation of the President,” he said. Continued Below

“Further, I personally briefed Mr. Rosenstein on Jim Comey’s memos describing his interactions with the President mere days after Mr. Rosenstein wrote the memo firing Jim Comey. Mr. Rosenstein’s testimony is completely at odds with the factual record. It looks to be yet another sad attempt by the President and his men to rewrite the history of their actions in 2017. They have found in Mr. Rosenstein – then and now – a willing accessory in that effort,” McCabe added.

Bartiromo told Senator Graham that “Somebody is lying here. Are you gonna call McCabe to testify in front of your committee?”

“Just as sure as the sun rises and sets, I will,” Graham expressed. “And here’s what I would say to Mr. McCabe: In the warrant application by the FBI and the Department of Justice to the FISA court, you said that the Russian sub-source was truthful and cooperative.” Continued Below

Senator Graham pointed out that Inspector General Horowitz found “the memo about the interview with the Russian sub-source saying that the Russian sub-source disavowed all the information in the dossier– that it wasn’t reliable– it was bar talk, it was hearsay. It shouldn’t be used to get a warrant. At the end of the day, the FISA court rebuked the the Department of Justice and the FBI, and I want to call every person who signed that warrant and have them account for what they knew and when they knew it.”

“We’re not gonna let the system blame some low-level intel-analyst or case agent for defrauding the court,” he warned. “I believe it goes up to the very top, and I’m gonna get to the bottom of it. And that means Sally Yates and Rosenstein, and McCabe and Comey are all gonna come before the committee, and they’re gonna be asked, ‘What did you know and when did you know it?'”

Bartiromo wondered: “Are we gonna see jail time here? They can’t all say, ‘We didn’t know it’, right?” Continued Below

Graham noted Senator John Hawley (R-MO) looked at Rosentein during the hearing and asked him, “If it’s not your fault, who is it?”

Graham added: “He say’s I’m accountable, but I’m not to blame. Jail time would lie with anybody who had knowledge that the Russian dossier, the sub-source disavowed the dossier. Remember McCabe and Horowitz said, ‘If you didn’t have the Russian dossier, you wouldn’t get a warrant’. Because they tried to get the warrant on an occasion before, it was turned down. McCabe said, ‘There’s a document in New York, you might want to use against Carter Page’, it was the Steele dossier”.

“I’m not gonna let these people blame some low-level intel agent or intel analyst, unless that’s the truth,” he reiterated. “And I don’t think it is the truth.”

Bartiromo asked Graham: “What you’re saying is, if they knew in January of 2017 that the dossier was garbage and the guy from Russia who brought them the dossier from Christopher Steele, also disavowed of the dossier? And yet, they still used it to continue getting warrants for Carter Page, and that was fraud. You think that could mean jail time if you can prove it that they knew it and they used it anyway?”

“Absolutely,” Graham confirmed. “Durham is looking at this. He found a memo on the file where the intel analyst who interviewed the sub-source, said the sub-source denied the details in the dossier– that he didn’t provide all this, he doesn’t know where some of it came from. And a lot of it was just hearsay, bar talk, not accurate. You’d have to believe that one of the most important investigations in the history of the FBI, a sitting president– that they system was denied information about a three day interview where the sub-source disavowed the primary document.” Continued Below

“And again, if the case agent, intel agent told higher up that this whole case is falling apart and they kept going forward, then they’re in trouble with the law,” he said.

The Senate Judiciary Chairman said he is going to interview the low level agents. “I made a request to interview the case agent and the intel analyst and there’s two other people, who interviewed the sub-source for three days in January, again in March, again in May, and they’re denying me the ability to do that. I’m gonna keep working the system. Attorney General Barr has been the most transparent attorney general in my lifetime. [Richard] Grenell released a lot of information,” he said.

“But why did they run all these stop signs? The question is: did the case agent and the intel agent refuse to tell the system about exculpatory information? Does the fault lie with two or three people? Or was it a system out of control? Here’s what I think: every time there was a stop sign for Carter Page or [General Michael] Flynn, the system moved forward because the people at the top did not want to stop. On January 4, the FBI wanted to clear General Flynn because there was no there-there, regarding him with working with the Russians. That’s when the January 5th meeting occured. It was the 7th floor [of the FBI] that wanted to continue looking at General Flynn, not the actual agents in the field,” Graham added.

(Related: Cruz To Rosenstein: Either You Were Complicit In A Coup Attempt Or You Were Grossly Negligent. Which One Was It?)