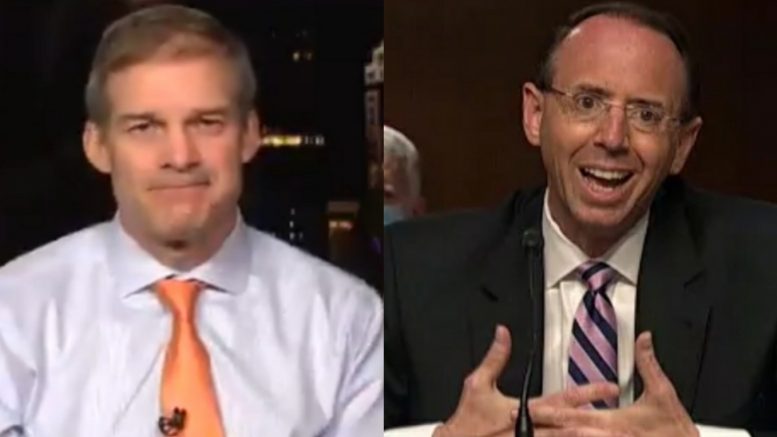 Congressman Jim Jordan is convinced now more than ever that Rod Rosenstein “caved to the swamp” based on the testimony he gave to the Senate Judiciary Committee on Wednesday.

Rosenstein confirmed to senators that there was no evidence of collusion between President Trump’s campaign and Russia dating back to August of 2017, however, the investigation continued and intensified anyway.

Related Article: While Being Grilled By Sen. Graham, Rosenstein Admits He Would Not Have Appointed Mueller Based On All Facts

During the hearing, Senator Lindsey Graham asked Rosenstein: “The whole concept, that the campaign was colluding with the Russians, there was no ‘there’ there in August of 2017, do you agree or not?”

“I agree with the general statement,” Rosenstein replied.

Rosenstein also admitted that he signed a FISA application without carefully vetting the information contained inside of it. And if he could do it all over again, knowing what he knows now, he probably wouldn’t have followed through with actions that were taken, including the appointment of Special Counsel Robert Mueller.

When pressed about Rosenstein’s testimony by Judge Jeanine, Jordan said, “When Senator Graham asked him was there anything there, he said there wasn’t. Yet, you had the number two guy at the Justice Department — frankly at the time in 2017, the Acting Attorney General Rod Rosenstein named the special counsel, expanded the scope of the special counsel and also remember Ros Rosenstein signed one of the FISA renewals on Carter Page…and yet, there was nothing there.”

“I think Rod Rosenstein just caved to the swamp,” Jordan declared. “I think he was afraid to stand up to where everyone in that town wanted to go.”

“I think Rod Rosenstein just caved to the swamp,” @Jim_Jordan says in reaction to Rosenstein’s testimony this week regarding the FBI’s Russia Investigation. pic.twitter.com/C0EBNfWGEV