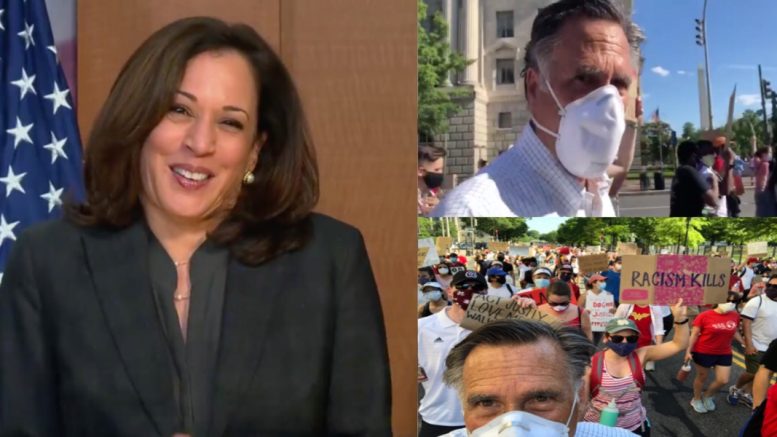 Senator Kamala Harris (D-CA) gushed over her colleague Senator Mitt Romney during an airing of ABC’s “The View” on Monday, after the Republican Utah Senator was seen marching with protesters to the White House over the weekend.

Romney was heard saying why he was walking: “… for violence, brutality, and to make sure that people understand that black lives matter”.

“How bout that, you know. You gotta give it to Mitt,” Senator Kamala Harris expressed to Joy Behar on “The View”.

“I’m getting to know him in the Senate and good for him, right,” Harris said. “He understands that this is a matter of justice. And anyone denied justice, means we are all denied justice.”

Democrats unveiled legislation Monday that, if passed, would increase accountability of police officers by banning certain practices and significantly curbing immunity from legal consequences stemming from acts committed in the line of duty.

The California Senator spoke about the bill, saying, “The national standard for use of force should be changed”, adding, “And as I say everywhere, bad cops are good for good cops. And we need to say that in one America with a system of justice that is written on the concept of the marble walls of the United States Supreme Court, we have as an ideal equal justice under law. We’ve not yet achieved that ideal, but I do believe this is a step toward that.” Video Below

We need more of this.pic.twitter.com/gWMvXiLPmn

"You gotta give it to Mitt."

Sen. Kamala Harris to the co-hosts on Mitt Romney marching in Black Lives Matters protest: "He understands that this is a matter of justice." https://t.co/GVLbmC3Llh pic.twitter.com/D7eMxflRn4

Tremendous sincerity, what a guy. Hard to believe, with this kind of political talent, his numbers would “tank” so badly in Utah! https://t.co/KqHsHmSRKo

People are in pain. We must listen. pic.twitter.com/5PJ9gqyu1q

(Related: Pelosi Leads Dems In A Moment Of Silence Taking A Knee & Introduces Justice in Policing Act Of 2020)