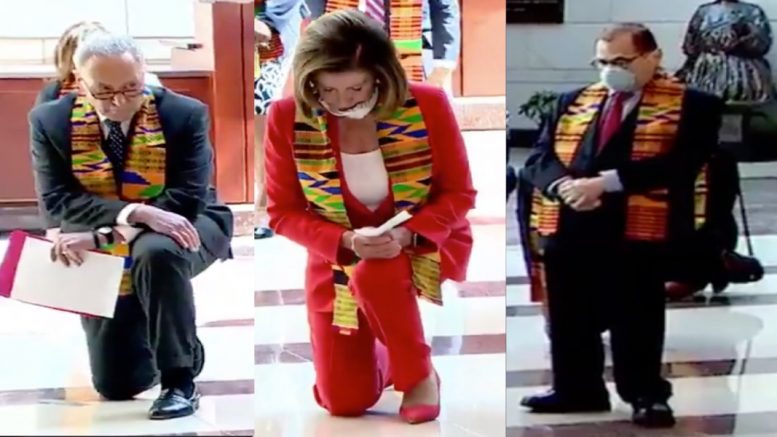 Democrats also unveiled legislation Monday that, if passed, would increase accountability of police officers by banning certain practices and significantly curbing immunity from legal consequences stemming from acts committed in the line of duty.

Congressional Democrats take a knee as they observe a nearly nine minute moment of silence for George Floyd at Emancipation Hall at the U.S. Capitol. https://t.co/JnqDlzMFDq pic.twitter.com/8CBdgtLUjz

The Democrats’ bill, Justice in Policing Act of 2020, comes as Americans across the country have protested in the aftermath of the death of George Floyd. (Continued Below)

As reported by CBS News:

The bill, led by the Congressional Black Caucus, was announced in a press conference with House Speaker Nancy Pelosi, Senators Cory Booker and Kamala Harris, and other congressional Democrats on Monday morning. The bill is 136 pages, and includes reforms to make it easier to prosecute police officers for misconduct in civil court.

The bill also aims to address cultural biases in police stations by mandating racial training. It would also change the standard for evaluating whether use of force was justified. Currently, officers only need to prove that use of force was reasonable. (Continued Below)

The bill also includes a provision for a separate crime for conspiring to violate federal hate crime laws, which would theoretically add a charge against mob-style lynchings. A recent anti-lynching bill failed. Through the bill, Democrats seek to establish a national use of force standard, ban federal use of chokeholds and racial profiling, and set up a National Police Misconduct Registry to maintain public records of officers’ violations, as reported by Fox News.

Some Democrats have called for disbanding police forces altogether. The Minneapolis City Council has already said they plan to do this in the aftermath of Floyd’s death.

LAW & ORDER, NOT DEFUND AND ABOLISH THE POLICE. The Radical Left Democrats have gone Crazy!

This year has seen the lowest crime numbers in our Country’s recorded history, and now the Radical Left Democrats want to Defund and Abandon our Police. Sorry, I want LAW & ORDER!