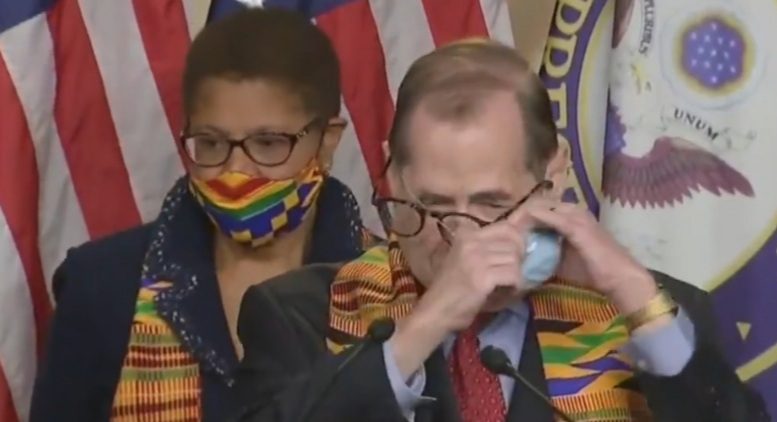 Congressman Jerry Nadler faced an awkward scenario on Monday right as he walked in front of the camera to speak to the press.

The situation unfolded as House and Senate Democrats held a news conference to unveil sweeping new legislation that, if passed, would increase accountability of police officers by banning certain practices and curbing immunity from legal consequences stemming from acts committed in the line of duty, Fox News reported.

Related Article: Pelosi Leads Dems In A Moment Of Silence Taking A Knee & Introduces Justice in Policing Act Of 2020

In a video that has since gone viral, Nadler is seen stepping up to the podium while he appears to be tussling with his mask in front of a live audience.

After realizing that the mask was not coming off without a fight, Nadler was forced to remove his glasses in order to set his protective gear free.

In other news, here's Jerry Nadler trying to take off a mask… pic.twitter.com/uvMBW9BdTz

In ending here is an image of Nadler standing up while other Democrats around him are kneeling:

Can't stop laughing because Jerry Nadler is the same height as everyone kneeling pic.twitter.com/iZzaut3xTE