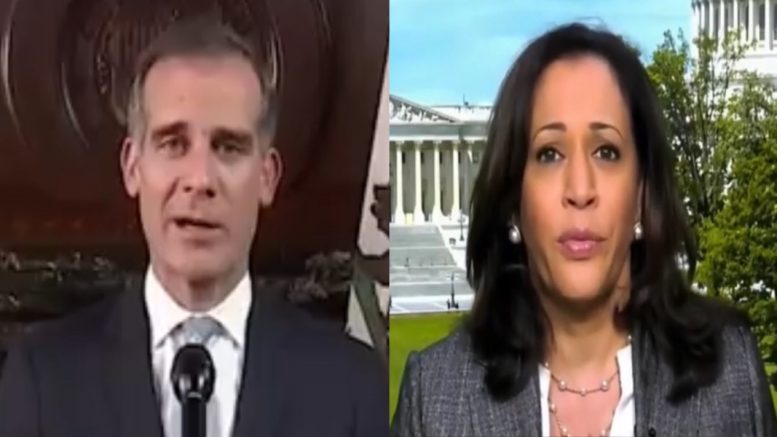 Senator Kamala Harris (D-CA) spoke with host George Stephanopoulos on ABC’s “Good Morning America” Tuesday after House and Senate Democrats on Monday held a news conference to unveil their new police reform bill. If passed, the bill would increase accountability of police officers by banning certain practices and curbing immunity from legal consequences stemming from acts committed in the line of duty.

Harris also weighed in amid the movement to “defund the police,” in the wake of national protests following the death of George Floyd.

“The reality is this: there needs to be accountability and consequence for anybody who breaks the law and breaks the rules. So what we’re talking about in our package, our bill, is doing just that. … And separately, we really have to get to a point where we agree the status quo way of thinking about achieving safety is really wrong when it assumes that the best way to achieve more safety is to put more police on the streets,” Senator Harris claimed.

Harris went on to claim that upper, middle class, suburbs in America have less “police presence” and have “good schools, good jobs, and income that helps them get through the month”.

Meanwhile, Los Angeles Democratic Mayor Eric Garcetti plans to make cuts up to $150 million to the city’s police department and redistribute the money to “black communities and communities of color.” Continued Below

Asked if she supports Mayor Garcetti’s move, Senator Harris said, “I support investing in communities so they become more healthy and therefore, more safe. Right now, what we’re seeing in America is many cities spend over one-third of their entire city budget on policing. But meanwhile, we’ve been defunding public schools in America. We’ve got to reexamine what we’re doing with American taxpayer dollars.”

“Are we actually creating healthy and safe communities? And that’s a legitimate conversation, and it requires a really critical evaluation. And I applaud Eric Garcetti for doing what he’s done,” she admitted.

When asked if America needs few police on the streets, Sen. Harris replied, “It means we need to invest in communities. It means that we need to invest in educating our children, when if you look at it over a course of time, we have defunded public schools. It means that we need to create economic opportunities, access to capital for small businesses in the midst of this coroanvirus, which is still present.” Video Below