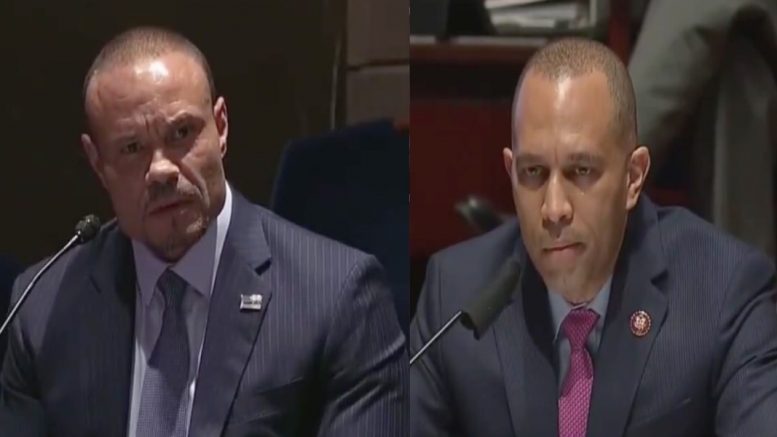 Jeffries had listed off some white men who were arrested with firearms, appearing to make “a racial thing out of it”, according to Bongino.

“Let’s review a few examples; in 2012, James Holmes entered a movie theater in Aurora, Colorado, and opened fire on an audience, killing 12 people and injuring 70. Holmes was heavily armed with a AR-15, 12 gauge shotgun, and a 40 caliber handgun. Yet, he was taken into police custody outside of the very same movie theater without incident. Mr. Bongino, James Holmes is white. Isn’t that correct?” Rep. Hakeem Jefferies asked.

“I’m not sure of his background,” Bongino replied. “I don’t know James Holmes personally.”

After Jeffries read off another example, Bongino said, “I don’t know why you’re making a racial thing out of it.”

When Jeffries tried to clarify, Bongino informed the New York Democratic Congressman, “I arrested those people, sir. You didn’t.”

This moment from @RepJeffries going after @dbongino is absurd. He repeatedly brings up white terrorists and their skin color and when pressed by Dan on why he's making it racial, Jeffries says "Black Lives Matter."

Dan has to remind him: "I arrested those people, you did not." pic.twitter.com/lG6pENHJ9q

We leave you with Bongino’s opening statement during the hearing:

Ask a spouse of a police officer why the sound of velcro at night is the greatest sound in the world –– then you will have a tiny idea of what it's like to wear the uniform.

The battle over law & order is not one our society can afford to lose.

My opening statement to Congress: pic.twitter.com/M28SLXJd5h