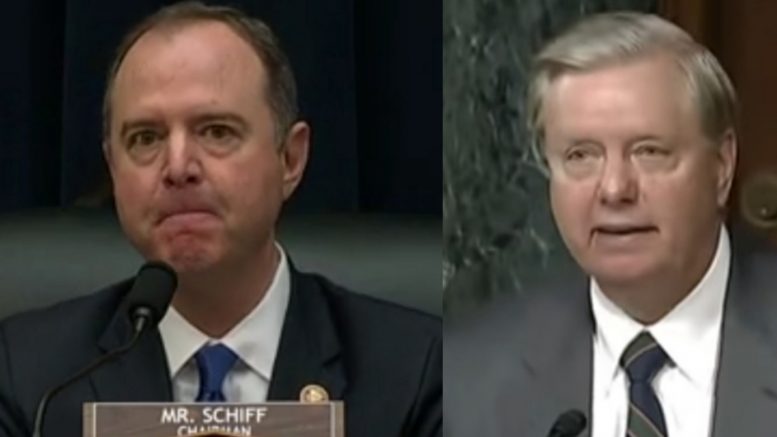 Congressman Adam Schiff appeared to be irked by news that Senator Lindsey Graham was approved by the Senate Judiciary Committee to subpoena former Obama Administration officials.

Schiff, who issued a wide range of subpoenas during his failed impeachment effort, jabbed at GOP Senators for “targeting Trump’s ‘enemy list'” rather than focusing on the Heroes Act and other issues that he thinks are more important.

“The Senate Judiciary Committee voted 12-10 along party lines Thursday to allow its chair, Sen. Lindsey Graham (R-S.C.), to subpoena former Obama administration officials as part of the GOP-led probe into the origins of the 2016 Russia investigation.

Related Article: Graham Says There Are ‘Real Good Candidates For Going To Jail’ Over FISA Abuse, Rips Dems For Not Caring

In response to the news by Axios, Schiff tweeted, “Almost 115,000 Americans have died from COVID-19. Millions are demanding justice and an end police brutality. And Mitch McConnell still hasn’t acted on the Heroes Act.”

“So what’s the Senate doing?” he questioned. “Targeting Trump’s ‘enemies list’ with baseless subpoenas.” See Below

Almost 115,000 Americans have died from COVID-19. Millions are demanding justice and an end police brutality. And Mitch McConnell still hasn’t acted on the Heroes Act.

So what’s the Senate doing?

Schiff and his Democrat colleagues came under fire by their critics after it was discovered that the coronavirus was likely spreading rapidly across the United States while they had the Senate tied up with their failed impeachment effort.

President Trump took decisive action against the virus as early as January. However, Democrat impeachment managers, including Schiff, were busy trying to persuade senators to remove Trump from office, which ultimately got voted down.

Prior to the Senate Judiciary Committee’s hearings that kicked off on June 3, Sen. Graham said he would invite Schiff to speak in front of the Senate to “explain his side of the story” in terms of his role in pushing the Russian collusion hoax.

Schiff had been accused of repeatedly leaking classified and “made up” information to the media in regards to the probe into President Trump’s campaign and Russia.

In ending here is video of Senator Graham discussing with Sean Hannity all of the latest developments in his investigation into the Russia probe origins: