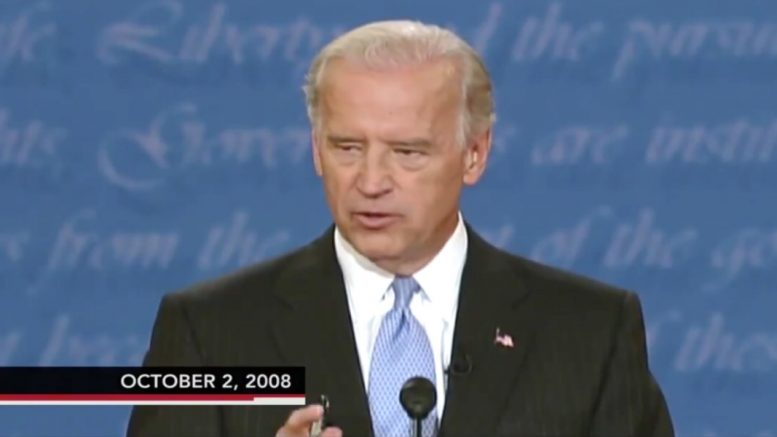 In a surfaced video, during a 2008 vice presidential debate, Joe Biden said that he did not support gay marriage.

“Let’s try to avoid nuance. Do you support gay marriage?” Biden was asked during the debate.

“No. Barack Obama nor I support redefining from a civil side what constitutes marriage. We do not support that,” Joe Biden said. “That is basically the decision to be left to faiths and people who practice their faiths the determination what you call it.”

Joe Biden in 2008 on if he supports gay marriage: “No. Barack Obama, nor I, support redefining from a civil side what constitutes marriage. We do not support that” pic.twitter.com/joydfVFSRg

However, Joe Biden has positioned himself as an advocate for gay rights since leaving the White House. Last year, his foundation launched the “As You Are” program to promote acceptance of members of the LGBTQ community and fight against their discrimination, reported Free Beacon.

In 2012 Biden, perhaps accidentally, endorsed gay marriage during a Meet the Press interview, going further than President Barack Obama wanted to during his reelection fight. Biden’s interview is credited with pushing Obama to get behind gay marriage when he was reluctant to.

But Biden didn’t always feel that way. He once told a group of constituents in Delaware he viewed homosexuals working for the federal government as “security risks,” according to an archived local news report dug up by the Washington Free Beacon. Continued Below

In his first year as a U.S. senator Biden appeared unwilling to accept members of the gay community as federal employees, per Free Beacon.

The article from the Morning News, a Wilmington, Delaware-based paper no longer in circulation, covered a September 24, 1973, meeting Biden held with members of the North Star Civic Association. One of the members, a gay-rights activist, asked Biden questions on job discrimination at the U.S. Civil Service and in the military.

Biden’s “gut reaction” on the issue was that homosexuals were “security threats,” he said.

“My gut reaction is that they (homosexuals) are security risks,” Biden is quoted as saying, “but I must admit I haven’t given this much thought … I’ll be darned.” Continued Below

He has criticized the former vice president for supporting “Don’t Ask, Don’t Tell” in the 1990s, a policy that prevented openly gay people from serving in the military. And he has stressed Biden’s 1996 vote for the Defense of Marriage Act, a federal law that barred legal recognition of same-sex marriages, per Washington Post.

“Joe Biden in the past has voted for what is called the Hyde Amendment, that said that women could not use Medicaid dollars in order to protect their reproductive rights and get an abortion,” Sanders told a crowd of supporters in March, at a rally in Chicago.