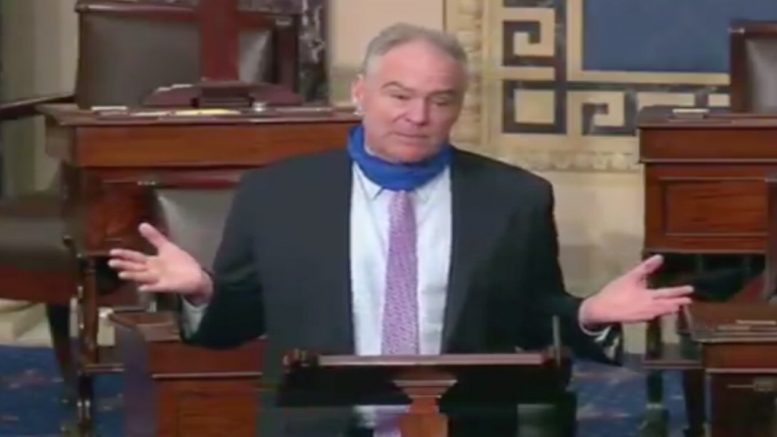 Senator Tim Kaine (D-VA) took to the Senate floor Tuesday amid nationwide protests across the country after the death of George Floyd and calls to defund the police.

“We need to promote better training and professional accreditation of police departments,” he continued. “Why do we demand that Universities maintain accreditation to receive federal funds, but make no such demands of law enforcement agencies?”

“We need to do much more within the criminal justice system…  to dismantle the structures of racism that our federal, state and local governments carefully erected and maintained over centuries,” Sen. Kaine said.

Kaine went on to explain how the first African-Americans that landed in Virginia in 1690, came into colonies that didn’t have slavery, “there were no laws in the colonies about slavery at that time.”

“The United States didn’t inherit slavery from anybody, we created it” Kaine claimed. “It got created by the Virginia General Assembly and the legislators of the other states. It got created in the court systems in the colonial America that enforced fugitive slave laws. We created it and we created it maintained it over centuries.” Video Below

Sen. Tim Kaine: "The United States didn't inherit slavery from anybody. We created it." pic.twitter.com/VM86sRrtn1

Users took to Twitter rejecting Senator Kaine’s remarks, while others gave him an instant history lesson:

Tim Kaine claming the United States “created” slavery seems like an odd way to admit he has no knowledge of world history pic.twitter.com/Nn0RaPunuQ

The institution of slavery predated America’s founding. As far back as 3500 BCE.

Sir, didn’t you go to Harvard? Please ask for your money back. https://t.co/MSyoLiyllI

Tim Kaine admits he has never read a book https://t.co/loG3bfcL9G

The United States didn’t inherit slavery from anyone. We created it.”

RT if you’re thankful this LIAR is not Vice President right now!

Nobody tell Tim Kaine what Moses did in the Book of Exodus https://t.co/wRmKxwljQx

Fact check – Slave traders bought the slaves from African nations, where slavery exists to this day.

Fact check – American companies like Apple still use slaves in the Congo for rare earth mining.

Tim Kaine clearly needs a drug test or he needs to freshen up on the history of the world. My God, this guy was almost our Vice President. Let that sink in! https://t.co/gRGEOnBdnR

Many warring Native American tribes captured each other & enslaved the survivors, well before the arrival of Europeans.

But he’d prefer we just hate America instead. https://t.co/S2y4gVIJOo

Bold statement from failed VP Nominee Tim Kaine – I wonder if he’s forgotten how to use Google or read a history book? https://t.co/Jwuy9JPZWw

He then claims that we corrected these injustice in his lifetime. Which means that Tim Kaine is approximately 150 years old. Looks pretty good for his age!

If a sitting U.S. senator believes this nonsense, imagine how many other people have been taught the same lie. https://t.co/dKfXtxespU