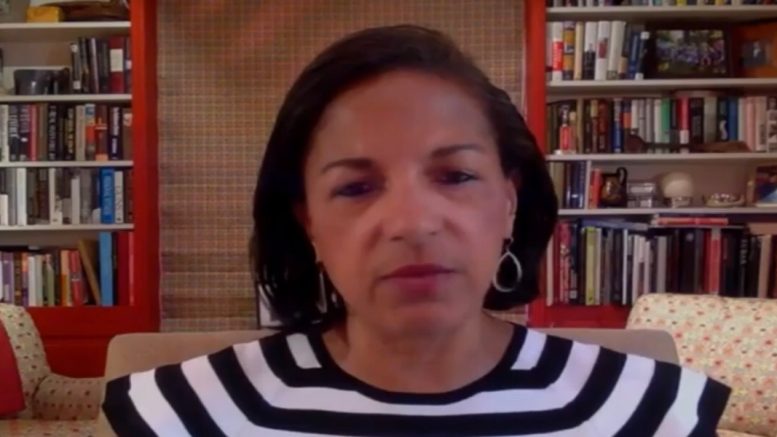 In an interview Friday on MSNBC, former Obama national security adviser Susan Rice said former Vice President Joe Biden should be elected because he “can heal and unify the nation” and “remove Donald Trump and consign him and those who supported him in the Senate to the trash heap of history.”

Her comment came during a discussion with host Andrea Mitchell over Senator Amy Klobuchar’s announcement that she is removing herself as a candidate to be former Vice President Joe Biden’s vice presidential pick.

Senator Klobuchar told MSNBC’s Lawrence O’Donnell Thursday that she called Joe Biden Wednesday evening with her decision, saying she believes “this is a moment to put a woman of color on that ticket.”

“After what I’ve seen in my state and what I’ve seen across the country, this is a historic moment, and America must seize on this moment,” Klobuchar said. “There are so many incredibly qualified women. But if you want to heal this nation right now — my party, yes, but our nation — this sure is a hell of a way to do it. And that’s just what I think after being through this in my state.”

While speaking with Andrea Mitchell, Susan Rice said: “What’s important about what Senator Klobuchar said and did is that she made clear that this election, and whoever Joe Biden chooses among many very talented candidates, is about getting Joe Biden in the White House. Somebody who can heal and unify the nation and remove Donald Trump and consign him and those who supported him in the Senate, to the trash heap of history.” Continued Below

Rice appeared to be referring to the February impeachment trial when the Republican-led Senate acquitted the president of two articles of impeachment that were charged against him by House Democrats, with a final vote of 52-48 for abuse of power, and 53-47 on an obstruction charge.

Rice continued: “We need each of those who have been considered [in the] present or in the past to put all of our efforts, regardless of who he chooses, into helping get Joe Biden elected.”

“And Amy Klobuchar reinforced that that was her priority last night, and I admire that enormously, and that’s my view as well,” she added. Video Below

Susan Rice also commented on Mary Elizabeth Taylor resigning as assistant secretary of state for legislative affairs in protest of President Donald Trump’s response to racial tensions in the country.

Andrea Mitchell said: “I want to ask you about this resignation. Unlike John Bolton, for instance, resigning, and making a lot of money, or Jim Mattis resigning and not explaining until later exactly why he was resigning, this was direct, it was personal, it names President Trump, it was specific.”

Rice claimed: “Well, I guess, Andrea, I would say better late than never. You know, to serve an administration which has been racist to its core for the last three-and-a-half years, from comparing the peaceful protesters at Charlottesville to white supremacists, call white supremacists very fine people, all the way through to the recent weeks where the administration has disparaged the Black Lives Matter movement, disparaged peaceful protesters, and made plain they prefer to stand by a Confederate legacy than a modern America, it’s been an administration whose record on race is just disgraceful.”

“So while I respect the fact that belatedly this assistant secretary, Ms. Taylor, has recognized how unconscionable that is and decided she can no longer serve, what we’ve seen in recent days is not that different, frankly, than what we’ve seen over the course of the last three-and-a-half years,” she added.

President Trump has repeatedly denounced all forms of hatred and racism, including white supremacists, which you can read more about HERE.