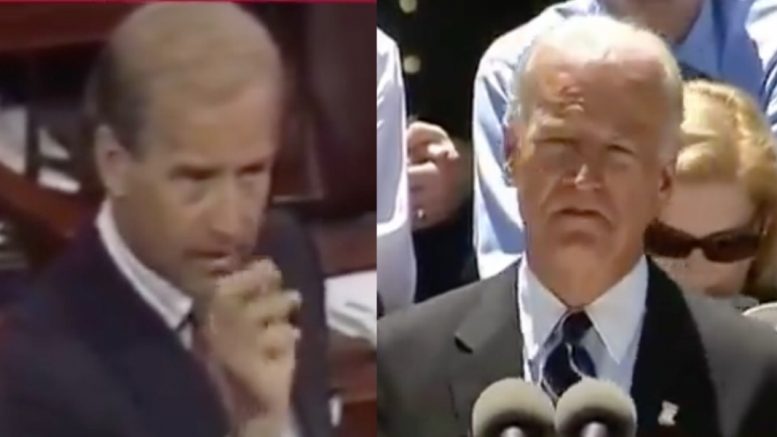 “Although I and my colleagues behind me revered the Senate, Robert C. Byrd elevated the Senate,” Biden said in his remarks in 2010.

Joe Biden had said of Robert Byrd, he’s a “friend, a mentor, and a guide”.

Robert Byrd was once an "Exalted Cyclops" of the Ku Klux Klan. He recruited and led a 150-member chapter of the KKK.

Joe Biden eulogized Byrd, calling him a "friend," a "mentor," and a "guide." pic.twitter.com/D6PDE1cmQ2

“Joe Biden is a shameless hypocrite. Since 2003, he has delivered fawning eulogies … to leading supporters of segregation, including a former member of the KKK,” the president said. Video Below

“And now, Biden is smearing [us] as racists, tens of millions of people like yourselves, decent hardworking Americans, who he’s never met and he frankly, probably doesn’t want to meet. America should not take lectures on racial justice from Joe Biden– a man who praised and partnered with segregationists,” he added.

Biden gave fawning eulogies for dead segregationists, including a former member of the KKK.

Now he is smearing tens of millions of decent, hard-working Americans as racists.

President @RealDonaldTrump is right! No one should take lectures on racial justice from Joe Biden. pic.twitter.com/3SC2Kkvv1q

In his eulogy more than 15 years ago for Thurmond, who later became a Republican, Biden said that while their “differences were profound,” he got to know him and “watched him change, oh so subtly,” Fox News reported.

“I went to the Senate emboldened, angered and outraged at age 29 about the treatment of African-Americans in this country, about everything for a period in his life Strom represented. But then I met the man,” Biden said at the time.

Biden called Thurmond a “brave man, who in the end made his choice and moved to the good side.” He said they became “good friends.” Video Below

It's worth watching Biden's eulogy for Strom Thurmond. Excerpt below. Here's a link: https://t.co/9w8FgtQdp2 pic.twitter.com/15k6vXhCdj

Biden publicly spoke of Thurmond on other occasions: The Washington Examiner recently drew attention to another speech Biden gave in 1988; he recalled joining the Senate and said “it turns out one of my closest friends ends up being Strom Thurmond, a man whose background and interests, at the time I came, were considerably different than mine,” per Fox News.

In 1991, Biden also bragged about working with Thurmond to pass mandatory minimums for a quarter-size of crack cocaine, noting the death penalty for a major drug dealer “involved in the trafficking of drugs”, adding: “You go to death”.

In 1991, Joe Biden bragged about working with segregationist Strom Thurmond to pass mandatory minimums for a quarter-size of crack cocaine.

(Related: Video Surfaces Of Biden In 2008 Against Supporting Gay Marriage: “No, Barack Obama, Nor I, Support Redefining From A Civil Side What Constitutes Marriage”)