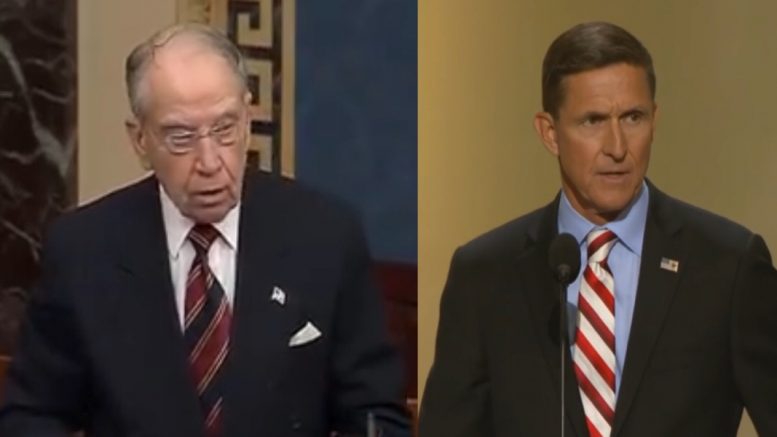 A federal appeals court on Wednesday ordered a lower court to allow the case against former National Security Adviser Michael Flynn to be dismissed, as requested by the Justice Department — likely ending the years-long legal saga stemming from the Russia investigation. The abrupt ending came in a 2-1 ruling and order from judges on the U.S. Court of Appeals for the District of Columbia, Fox News reported.

General Michael Flynn’s lawyers asked for a writ of mandamus — an order telling a government official to carry out a certain duty — directing District Judge Emmet Sullivan to approve the DOJ’s motion to dismiss:

Wednesday’s court order was direct, ordering “that Flynn’s petition for a writ of mandamus be granted in part; the District Court is directed to grant the government’s … motion to dismiss; and the District Court’s order appointing an amicus is hereby vacated as moot, in accordance with the opinion of the court filed herein this date.”

Sullivan did not immediately grant that motion and instead sought to hold hearings on the matter, angering Flynn allies. It’s unclear whether Sullivan could try to appeal to the full appeals court or even to the Supreme Court in order to keep the case alive. The next step otherwise would likely be for Sullivan to comply, reported Fox News.

The accompanying decision, however, backed federal prosecutors in their move to drop the case. Continued Below

”In this case, the district court’s actions will result in specific harms to the exercise of the Executive Branch’s exclusive prosecutorial power. The contemplated proceedings would likely require the Executive to reveal the internal deliberative process behind its exercise of prosecutorial discretion, interfering with the Article II charging authority,” Judge Neomi Rao, a Trump appointee, wrote in the decision.

Judge Robert Wilkins, dissenting, wrote: “It is a great irony that, in finding the District Court to have exceeded its jurisdiction, this Court so grievously oversteps its own. This appears to be the first time that we have issued a writ of mandamus to compel a district court to rule in a particular manner on a motion without first giving the lower court a reasonable opportunity to issue its own ruling.”

“Appeals [court] order [to] dismiss bogus case vs Lt Gen Flynn is [important] step [to] restoring justice after clear record of DOJ/FBI attempt [to] not only frame him, but also cover it up/hide exculpatory info during [years] of litigation. Then judge tried to keep it going. This abuse must never happen again,” Sen. Grassley tweeted. Continued Below

“Is James Comey and his band of Dirty Cops going to apologize to General Michael Flynn (and many others) for what they have done to ruin his life? What about Robert Mueller and his Angry Democrat Cronies – Are they going to say, SO SORRY? And what about Obama & Biden?” the Commander in Chief wondered.

Is James Comey and his band of Dirty Cops going to apologize to General Michael Flynn (and many others) for what they have done to ruin his life? What about Robert Mueller and his Angry Democrat Cronies – Are they going to say, SO SORRY? And what about Obama & Biden?

Meanwhile, notes from former FBI agent Peter Strzok were released Wednesday, showing that Joe Biden appeared to be one to raise “Logan Act v[iolation]? And Barack Hussein Obama ordered: “make sure you look at things” with “the right people”.

When Obama says he doesn’t intervene or direct anything in “law enforcement” investigations, can someone please ask him to make same denial in regards to “national security” or “counterintelligence” investigations?

Because it sure looks like he directed the @GenFlynn interview

(Related: Sidney Powell Releases A Statement After Flynn Transcripts Released: “No Words Sufficient To Convey Our Disgust & Disdain For All Those Responsible”