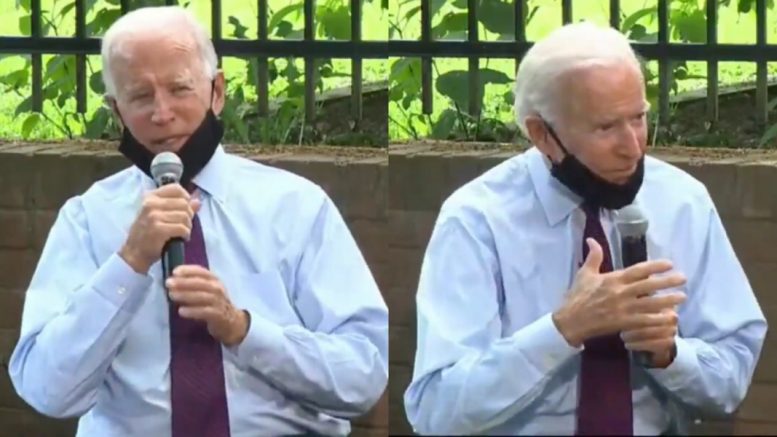 Biden’s gaffe occurred when he was speaking to supporters during an event over health care in Lancaster, Pennsylvania.

“What people drastically underestimate is the impact on the medical health of people who, now, everything is complicated,” Joe Biden said. “Not only is the healthcare piece, but people don’t have a job, people don’t have anywhere to go. They don’t know what they’re going to do.”

“You have, unnecessarily, now we have over 120 million dead from COVID,” Biden claimed, just before the video froze up.

Biden’s image froze for over a minute, then the feed cut to a placeholder screen for the broadcaster, then resumed at a different venue for a prepared speech. It is unclear what, if any, correction Biden made for the inaccurate statistics, Breitbart reported.

To date, the United States has approximately 2.45 million confirmed coronavirus cases and 124,000 deaths, along with 760,000 recoveries, according to Google. Worldwide, nearly 9.5 million cases have been confirmed and 484,000 deaths, while 4.78 million have recovered. Video Below

Joe Biden claims “now we have over 120 million dead from COVID”https://t.co/m1ACghhi3l pic.twitter.com/GmLuQ5wt4z

WHAT IS GOING ON WITH JOE BIDEN?

Joe Biden just said, "Now we have OVER 120 MILLION dead from COVID." pic.twitter.com/QBQTDyzzZt

During a February Democratic primary debate, Biden also falsely announced “150 million people” or over 40% of America’s population, have been killed “on our streets” since 2007 from gun violence.

FLASHBACK: Back in February, no one batted an eye or bothered to correct Joe Biden when he said 150 MILLION Americans have been killed by by gun violence. (a completely absurd number). pic.twitter.com/k6M8EfYHeF

(Related: Joe Biden’s Eulogies For Former KKK Member & Segregationist Get Put Back In The Spotlight)