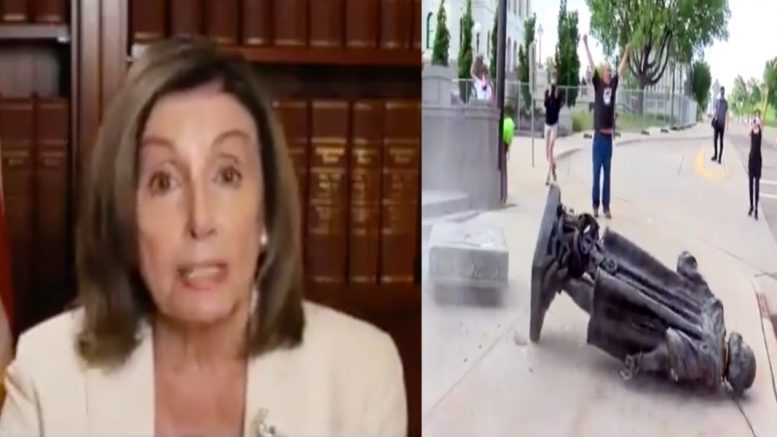 During a Washington Post live stream interview, House Speaker Nancy Pelosi (D-CA) weighed in on the conversation of “activists” who have recently tore down the statues of “founding fathers”.

“What’s your message to some activists who say the Founding Fathers– there needs to be a reckoning of some sort, whether it’s tearing down their images or just having a conversation? How should this nation handle the issue of slave owners and our Founding Fathers moving ahead?” Robert Costa asked Pelosi.

“We have a list of grievances that are apart of our early years of our country, and we do not want that to be continued by glorifying any of the people who perpetrated any of those injustices,” she said.

Responding to the statues, the House Speaker suggested: “I would say rather than tearing down and defacing, why don’t we just have a review– have a review, in terms of let’s take it down safely, so that we’re not hurting anybody when the statue comes down, costing more money to get rid of it, or get rid of the defacing of something that might not– shouldn’t have been.”

“But I think– I’m all for it! Let’s review this. Why are we glorifying the sins of the past? That doesn’t mean– [be]cause Thomas Jefferson or George Washington, or others were slave owners that should undermine what they did for our country,” she said. Continued Below

“These confederates, Jefferson Davis, Alexander Stevens– they committed treason against the United States in the name of slavery,” Pelosi said. “I think that’s a different story.”

“But you know what? Subject everything to scrutiny,” she added. “And make a decision.”

Meanwhile, Pelosi has remained silent on her father’s role in the dedication of memorials dedicated to Confederate figures. Video Below

Nancy Pelosi to those tearing down the Founding Fathers' statues: "all for" review, "subject everything to scrutiny"https://t.co/xaZCOZF42H pic.twitter.com/VO3rJRlJRB

As reported by Washington Examiner:

Pelosi’s father, Thomas D’Alesandro Jr., oversaw the dedication of a monument to Confederate generals Stonewall Jackson and Robert E. Lee when he was Baltimore’s mayor in 1948, saying at the time that people should be inspired by the two generals and should try to “emulate Jackson’s example and stand like a stone wall against aggression in any form that would seek to destroy the liberty of the world.”

“World Wars I and II found the North and South fighting for a common cause, and the generalship and military science displayed by these two great men in the war between the states lived on and were applied in the military plans of our nation in Europe and the Pacific areas,” D’Alesandro Jr. said at the time. Continued Below

He continued: “Today with our nation beset by subversive groups and propaganda which seeks to destroy our national unity, we can look for inspiration to the lives of Lee and Jackson to remind us to be resolute and determined in preserving our sacred institutions … remain steadfast in our determination to preserve freedom, not only for ourselves, but for other liberty-loving nations who are striving to preserve their national unity as free nations.”

The statue D’Alesandro Jr. dedicated was removed by Baltimore officials in 2017.

When asked in 2017 about why she didn’t push to remove 10 Confederate statues, Drew Hammill, Pelosi’s deputy chief of staff, said, “Reminder: As Speaker, Pelosi moved statue of Robert E. Lee from National Statuary Hall in US Capitol to the basement.

Reminder: As Speaker, Pelosi moved statue of Robert E. Lee from National Statuary Hall in US Capitol to the basement https://t.co/pfHgbZi9Xt pic.twitter.com/gtG7kdirjY