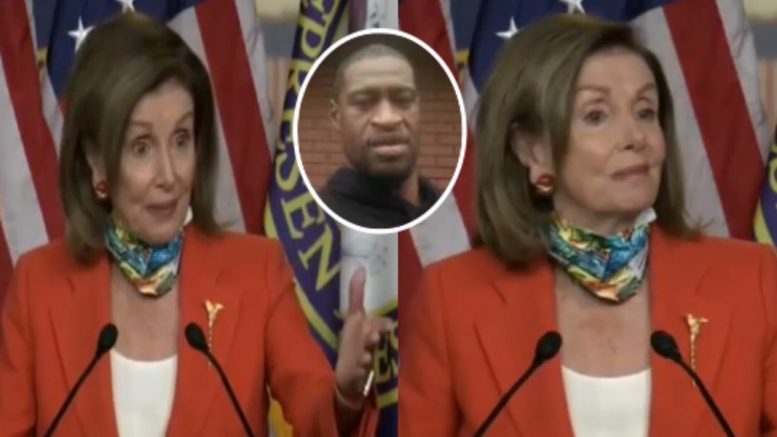 During her weekly press conference on Friday, House Speaker Nancy Pelosi (D-CA) referred to George Floyd as “George Kirby”, and she said again, “I do not” apologize for accusing Republicans of the murder of Floyd.

On Tuesday, Pelosi accused Republican senators, during a CBS News interview, of “trying to get away with murder, actually, the murder of George Floyd”, pertaining to police reform. On Wednesday, she doubled down and told NBC News’ Peter Alexander that she “absolutely, positively” will not apologize.

George Floyd’s brother, Philonise Floyd, testified on June 10 before the House Judiciary Committee over police brutality and racial profiling, and implored lawmakers to act so that his brother’s death, after being brought into police custody, was “not in vain.”

Nancy Pelosi said of Philonise Floyd: “I’m very proud, before the Judiciary Committee, before he testified he said to me, ‘Madam Speaker, do you think that I can tell George’s daughter that his name will always be remembered because you’ll name the bill for him?’ I said, ‘Well, I’ll recommend that to the Judiciary Committee and to the Congressional Black Caucus, who have shaped the bill'”.

“But I will only do that if you tell me this legislation is worthy of George Kirby’s name,” Pelosi said. “And he said it is. And so, we’re very proud, very proud to carry that.”

Asked by a reporter, why it was appropriate to suggest that Republicans are trying to get away with the murder of George Floyd, Pelosi appeared flustered that a reporter pressed her over her remarks, but she again refused to apologize. Continued Below

“I think George Floyd’s murder would have been prevented if our bill that we have now is– were the law of the land. And that is what we’re talking about– how we go forward,” Pelosi said, though she has served in Congress, contributing to legislation for more than three decades.

When asked if she went too far on her comment, she replied, “I do not, I do not, I do not. I’m telling you– we’re talking about something that is an incident that everybody saw– the martyrdom. Everybody saw eight minutes, forty-six seconds of the knee on the neck. That should– and they come up with a bill that says– the president comes out with his whatever it is, saying um– no chokeholds, but maybe some.”

“Yeah, no, I have no– absolutely not,” Pelosi said. Video Below

Nancy Pelosi: “I do not” apologize for accusing Republican senators of being complicit in murderhttps://t.co/cBhLvmpzg8 pic.twitter.com/nPjDD8pnWo

Senate Democrats on Wednesday, blocked the GOP police reform bill, 55 to 45 on advancing the measure to pass the JUSTICE Act, falling short of the 60 votes needed, which was written by Senator Tim Scott (R-SC).

(Related: Pelosi Says She Will ‘Absolutely, Positively Not’ Apologize For Claiming GOP Senators Are “Trying To Get Away With Murder, Actually, The Murder Of George Floyd”