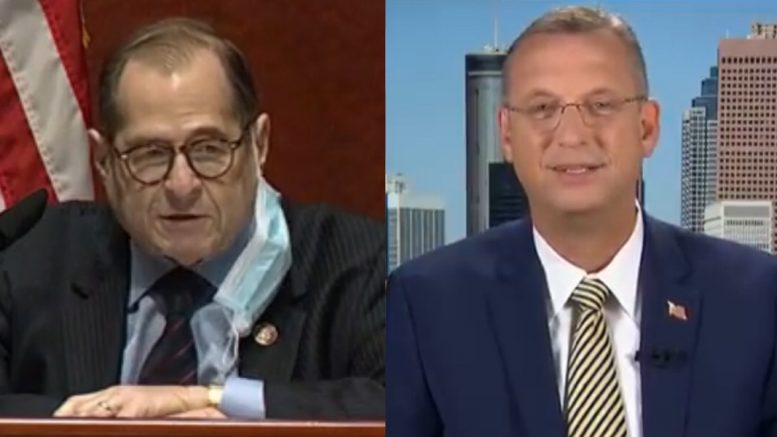 Rep. Collins told Bartiromo that the House Judiciary Committee has had “none of any consequent; we’ve only brushed on it occasionally. This is one of the biggest issues we have going on right now”, referring to hearings on China and national security.

“You’ve had no hearings on national security and China? And China has been eating our lunch, stealing intellectual property regularly for decades, and it has only picked up speed in the last two years. What have you been focused your time on Congressman? How many hearings have you had on investigating Trump?” Maria Bartiromo asked Rep. Doug Collins.

The Georgia Congressman replied: “More than I can count. The thing about it is, Chairman Nadler seemed obsessed from day one, with just simply going over his old counter mate Donald Trump, who at the time, when he knew him in New York, and now as President, it was like ‘all I wanna do is get at President Trump’. We’ve had nothing but hearings”.

“Remember Maria, let’s take back each other in time. We started off with Acting Attorney General [Matt] Whitaker. He thought that was one of the most important hearings we could’ve had to start last year. And then, it rolled into the Mueller report, and then it rolled into [Attorney General William] Barr being asked if he could come in. And then, then blew up that. And Steve Cohen and others making fun and bringing fried chicken to hearings,” Rep. Collins pointed out.

The Georgia Congressman noted the hearings conducted over the past couple weeks on policing, Chairman Jerry Nadler “never picked up on the police working group that Chairman [Bob] Goodlatte has started before”.

Collins said of Nadler: “Instead, he had a singular minded focus from him and Nancy Pelosi and that was ‘what can we do to influence the 2020 election, so Donald Trump loses?'”

Bartiromo expressed: “That’s unbelievable. We are hearing one after the other in Congress that China is the biggest threat that this country faces. They are sending researchers in regularly to steal intellectual data– everything from military to medicine to agriculture, ect. And you’ve had no hearings about it in the Judiciary Committee? … The American people should be outraged … by your committee– 100%.” Video Below

During his interview with Maria Bartiromo, Rep. Collins noted the whistleblower who testified this week. Here is a clip of that exchange:

WATCH → One of today’s witnesses testifying as a DOJ “whistleblower” admits he requested to work for @JerryNadler during impeachment.

This should tell you everything you need to know about today’s hearing. pic.twitter.com/ME29o28hGL

Judiciary Committee Democrats are obsessed with trying to take down @realDonaldTrump.