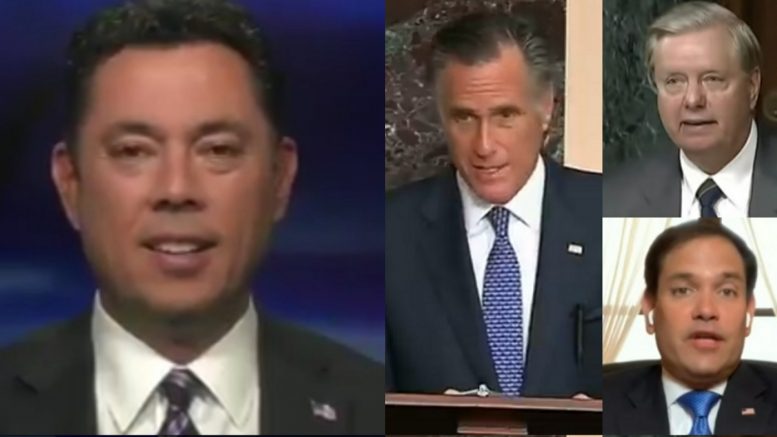 Last Wednesday, Trump announced his plan to withdraw up to 27,000 U.S. troops from Germany and either re-locate them in Poland or bring them back to America. The proposed move is designed to send a message to Germany that they need to stop taking advantage of the U.S. and start paying their fair share to NATO.

“Romney (R-Utah) introduced a measure Monday alongside Sens. Lindsey Graham (R-SC), Marco Rubio (R-Fla.), Chris Coons (D-Del.), Tim Kaine (D-Va.) and Jeanne Shaheen (D-NH) prohibiting the White House from reducing the number of active-duty troops in the country below 34,500 without Congress confirming that such a move would not negatively impact European alliances or NATO.”

Related Article: Sen. Romney: “I’m Confident We Will Keep Majority In Senate & I Have Long Predicted The President Will Be Reelected”

When pressed about the latest “RINO Resistance” against President Trump, Jason Chaffetz said, “You don’t win elections by being in the wishy washy middle. You don’t win elections through the policy of appeasement. You do it in principle. You fight on principle, and you do that in such a way that you don’t end up like John McCain running for President or Mitt Romney running for President.”

“You have a leader in Donald Trump who has an America First agenda. It’s working, it was working, it will continue to work. And to try to jump off and leave the President out their by himself is not a formula to go out and win an election,” he concluded. Video Below

RINO Recipe for Failure: @jasoninthehouse says RINOs will fail in November if they run on appeasement rather than on the agenda of @realDonaldTrump. #AmericaFirst #MAGA #Dobbs pic.twitter.com/KA9u8I9fdU