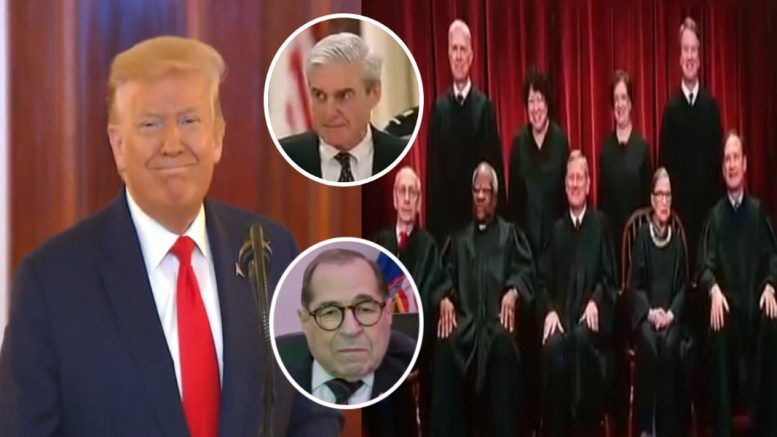 The Supreme Court of the United States on Thursday, handed President Trump a “significant win” as they denied House Democrats access to grand jury material from former special counsel Robert Mueller’s Russia investigation until at least 2021, in an apparent effort by Democrats to initiate a second impeachment investigation against the president.

Swamp Drain previously reported that the Supreme Court had temporarily denied a motion in May, to keep undisclosed details from the probe into Russian interference in the 2016 presidential election out of the Democrats’ hands until at least early summer.

In March, a federal appeals court in Washington, D.C., ruled that the House committee is entitled to the evidence.

The House Judiciary Committee argued that the secret grand jury material “is central” to its inquiry into possible obstruction of justice by President Donald Trump and could reveal new evidence of impeachable offenses. If so, the committee said it will consider recommending new articles of impeachment.

The Justice Department said House Democrats aren’t entitled to grand jury evidence because they have yet to explain which specific testimony they need access to or how it would help its investigation. Solicitor General Noel Francisco argued the House has no “urgent need of the requested materials for a hypothetical second impeachment.”

Grand jury material from former special counsel Robert Mueller won’t be released to the Democratic-led House of Representatives at least for now, after the Supreme Court on Thursday granted the Trump administration’s request to take up the case next term, CNN reported. Continued Below

The court’s move is a victory for the Justice Department, which is seeking to prevent the release of the information, which includes portions of Mueller’s report that were redacted to protect grand jury information and underlying grand jury testimony and exhibits that relate to certain individuals and events, per CNN.

“I am disappointed by the Court’s decision to prolong this case further, but I am confident we will prevail. In every administration before this one, DOJ has cooperated with the Judiciary Committee’s requests for grand jury materials relating to investigations of impeachable offenses. Attorney General Barr broke from that practice, and DOJ’s newly invented arguments against disclosure have failed at every level,” Nader said. Continued Below

“Unfortunately, President Trump and Attorney General Barr are continuing to try to run out the clock on any and all accountability. While I am confident their legal arguments will fail, it is now all the more important for the American people to hold the President accountable at the ballot box in November,” Rep. Nadler added.

Former assistant deputy attorney general Tom Dupree said the Supreme Court’s decision on Thursday is a “pretty significant win” for the president, adding: “The Democrats were very eager to get their hands on these documents. These are grand jury materials and other materials connected with the Mueller report that have never seen the light the day.”

(Related: AG Bill Barr On The Steele Dossier: “Robert Mueller Was Responsible For Looking At [It] Under His Charter”)