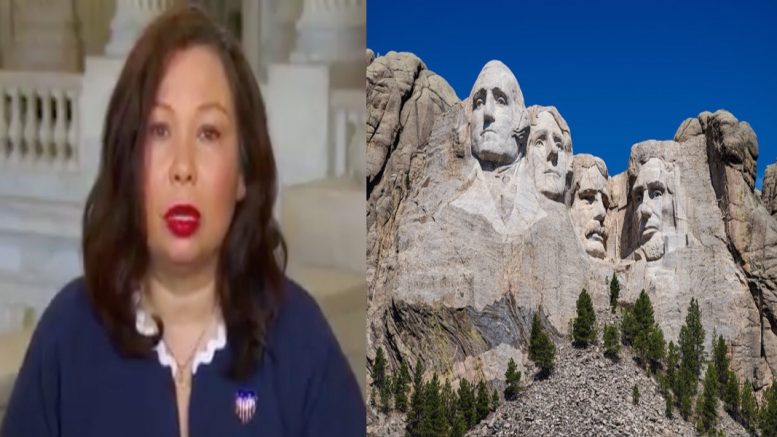 Democrat Senator Tammy Duckworth (IL) spoke with host Dana Bash on Sunday during CNN’s “State of the Union”, saying she is open to listening to arguments for removing statues of founding fathers George Washington and Thomas Jefferson.

ABC reported that Duckworth is on a shortlist to be vetted for Joe Biden’s running mate.

Dana Bash asked Duckworth: “Senator, I know that you support change in the name of military bases named after Confederate leaders, but there are leaders like George Washington and Thomas Jefferson who were slave owners. And some people are demanding their monuments come down, too. In your view, where does it end? Should statues, for example, of George Washington come down?”

“Well, let me just say we should start off by having a national dialogue on it at some point,” Duckworth replied. “But right now we’re in the middle of a global pandemic. And one of our countries that are opposed to us, Russia, has put a bounty on American troops’ heads.”

“What really struck me about this speech that the president gave at Mount Rushmore was that he spent more time worried about honoring dead Confederates than he did talking about the lives of our 130,000 Americans who lost their lives to COVID-19, or by warning Russia off of the bounties they’re putting on Americans’ heads,” she said. Continued Below

Dana Bash pressed the Democratic Senator again over removing the statues. “That may be true, but I don’t think anyone would call George Washington a traitor. And there are moves by some to remove statues of him. Is that a good idea?” she asked.

The purchased territory included the whole of today’s Arkansas, Iowa, Missouri, Kansas, Oklahoma, and Nebraska, parts of Minnesota and Louisiana west of Mississippi River, including New Orleans, big parts of North and northeastern New Mexico, South Dakota, northern Texas, some parts of Wyoming, Montana, and Colorado as well as portions of Canadian provinces Alberta and Saskatchewan, as reported by History.net.

"His priorities are all wrong," Sen. Tammy Duckworth reacts to Pres. Trump's Mt. Rushmore speech where he defended Confederate monuments. "He should be talking about what we're going to do to overcome this pandemic… he spent all his time talking about dead traitors." #CNNSOTU pic.twitter.com/eWEq750ZPy

Last month, House Speaker Nancy Pelosi (D-CA) said she is “all for” putting historical statues up for review and said we should “subject everything to scrutiny”.

During a Washington Post live stream interview, the House Speaker suggested: “I would say rather than tearing down and defacing, why don’t we just have a review– have a review, in terms of let’s take it down safely, so that we’re not hurting anybody when the statue comes down, costing more money to get rid of it, or get rid of the defacing of something that might not– shouldn’t have been.”

“But I think– I’m all for it! Let’s review this. Why are we glorifying the sins of the past? That doesn’t mean– [be]cause Thomas Jefferson or George Washington, or others were slave owners that should undermine what they did for our country,” Pelosi said. … “But you know what? Subject everything to scrutiny. And make a decision.”

Nancy Pelosi to those tearing down the Founding Fathers' statues: "all for" review, "subject everything to scrutiny"https://t.co/xaZCOZF42H pic.twitter.com/VO3rJRlJRB