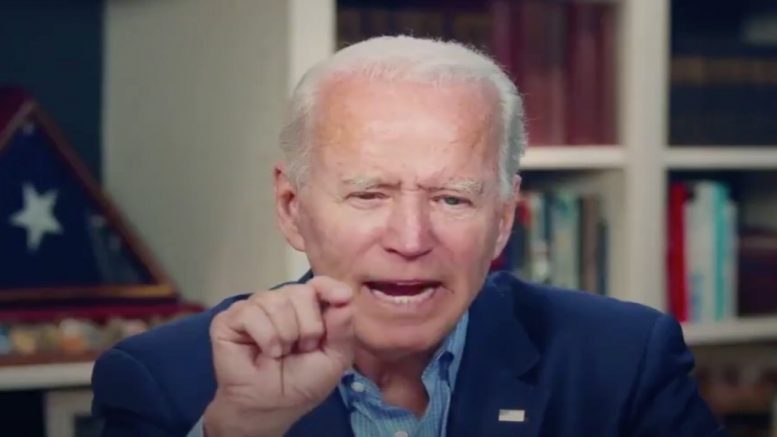 On Wednesday, Democratic presidential nominee Joe Biden said in an interview that some funding should “absolutely” be redirected from police, amid calls from some in his party to “defund the police” following protests across the country.

Biden’s campaign has said he does not support defunding the police. But in a Now This interview with activist Ady Barkan, the presumptive Democratic nominee said that police forces don’t need surplus military equipment, saying this is what leads them to “become the enemy” in a community, Fox News reported.

“But do we agree that we can redirect some of the [police] funding?” Ady Barkan asked.

“Surplus military equipment for law enforcement, they don’t need that. The last thing you need is an up-armored Humvee coming into a neighborhood, it’s like the military invading,” Biden suggested.

“They don’t know anybody. They become the enemy. They’re supposed to be protecting these people,” Biden added. Video Below

I asked Joe Biden what he thinks about this approach. Watch his answer. pic.twitter.com/vnXhhhw7Rx

In early June, the Biden campaign said that Biden does not believe that police should be defunded.

“As his criminal justice proposal made clear months ago, Vice President Biden does not believe that police should be defunded,” Biden campaign Rapid Response Director Andrew Bates said at the time. “He hears and shares the deep grief and frustration of those calling out for change, and is driven to ensure that justice is done and that we put a stop to this terrible pain.”

Bates added that Biden supports “the urgent need for reform,” which he said includes “funding for public schools, summer programs, and mental health and substance abuse treatment separate from funding for policing — so that officers can focus on the job of policing.

Following Biden’s remarks on Wednesday, Trump 2020 campaign rapid response director Andrew Clark wrote on Twitter that it looked like Biden had “changed his position” on defunding police, attaching a clip from the Now This interview. Continued Below

Last month, I literally wrote that a statement from the Biden campaign saying he opposes defunding the police "isn't worth the paper it's printed on" because Joe would inevitably go on camera and endorse it.

Exactly one month later, there it is. CC @AndrewBatesNC pic.twitter.com/db33ldvBdd

However, Biden’s campaign denied that the former vice president changed his position.

“I’d like to thank Donald Trump – for hiring an illiterate comms staff. Biden is running on *more* COPS funding for community policing,” Bates, Biden’s director of rapid response, shot back. “The same sentiment you’re taking out of context RE: local budgets is *in* the articles about him opposing defunding.”

I'd like to thank Donald Trump – for hiring an illiterate comms staff. Biden is running on *more* COPS funding for community policing.

The same sentiment you're taking out of context RE: local budgets is *in* the articles about him opposing defunding.https://t.co/v3ELPG4RJl https://t.co/ed8tg3X7a8 pic.twitter.com/5fBNqhPoBK

Joe Biden just said he’d redirect funding from police. He called police “the enemy.” He has completely caved to the extreme leftist mob.

Joe Biden is WEAK and DANGEROUS.

This is Joe Biden’s America.pic.twitter.com/2DHQW4ISfA

It didn’t take long for Joe Biden to cave in to radicals on the left demanding to “Defund the Police.”

Biden is weak and can’t stand up to the radicals running his party!https://t.co/YHhZwHzUhL

Newsflash: “Redirect funding” from the police is the same as “defund” the police.

Biden has totally caved to the far left, and it’s why he would be a disaster as President!pic.twitter.com/NfSuWwT3Hc

So – scratch and sniff, creepy Joe Biden said today that the police are the enemy?

That’s 800,000 more votes by policemen and women for President Trump.

This is scary. @JoeBiden is too weak to stand up to his own supporters calling for defunding the police. https://t.co/aEPuZd6dN9