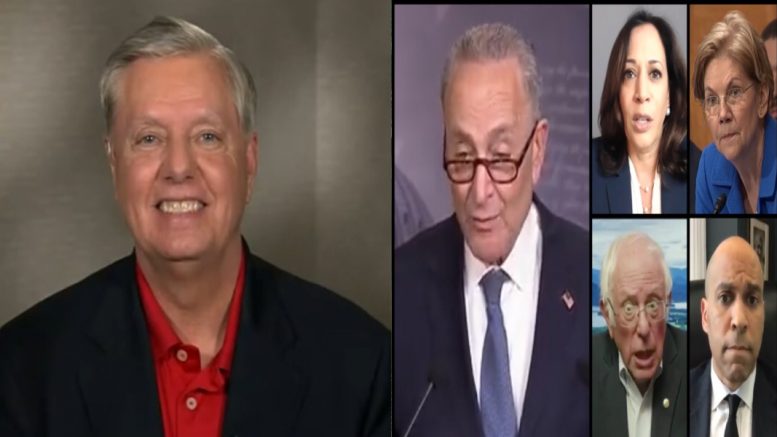 Hannity mentioned former Vice President Joe Biden, who said in a Wednesday interview, that some funding should “absolutely” be redirected from police, amid calls from some in his party to “defund the police” following protests across the country. Biden also suggested police officers “become the enemy”.

“I’ll tell you something right now: If you’re looking for a place to come where none of this crazy shit will happen, come to South Carolina,” Senator Lindsey Graham declared. “We’re not gonna defund the police. We’re not gonna destroy capitalism. We’re gonna let you work hard, and the harder you work, the better you do in South Carolina.”

Senator Graham announced that he is going to take the “mobs” bill, the “squad”, and “introduce it” to the Senate, adding: “I’m gonna ask everybody in the Senate to vote on it.”

The legislation, known as the BREATHE Act, calls for federal funding of local police and federal agencies to be reduced and the difference diverted to pay for health care, education, environmental, and housing programs. It would also eliminate federal programs and agencies used to finance Immigration and Customs Enforcement (ICE) and the controversial Department of Defense 1033 program, which transfers excess military equipment to civilian law enforcement agencies, reported Fox News. Continued Below

“When Joe Biden means transform the country, what do you mean, Joe? Are you with them? If you’re not with them, tell me how you’re different” Graham insisted, referring to Biden’s tweet that said: “We’re going to beat Donald Trump. And when we do, we won’t just rebuild this nation — we’ll transform it.”

“To every Democratic Senator: What do you think about defunding the police? Are you with the squad? If you’re not, tell ’em why you’re not with them. We need to vote on this stuff, not just talk about it on cable TV. Let’s vote on their ideas and see where the Senate is,” the South Carolina Senator recommended. Continued Below

“These people that you just talked about, the squad, for lack of a better word, will destroy the country. Where’s the Democratic Party,” Senator Graham asked. “Has one member of the United States Senate stood up and said, ‘This is nuts!’ Has any Democratic Senator stood up and said, ‘It’s crazy to defund the police! It’s crazy to destroy free enterprise and replace it with socialism.'”

“They are silent, [be]cause they are afraid,” he asserted. “Chuck Schumer won’t say a damn thing because he’s afraid AOC is gonna run against him. So, Chuck Schumer needs to vote on AOC’s work product.”

Hannity named a list of some of the Democrats’ wish list items that Biden has reportedly endorsed, noting that in 118 days, the America people will decide the future of the country, which prompted Senator Graham to say: “You may not like everything about Donald Trump, he may rub you wrong, but if the other side wins, they’re going to destroy your families ability to be safe and be prosperous.” Video Below

“I hope people are paying attention what it means for Donald Trump to lose: If he wins, it means a strong economy, a secure America, funding the police, not defunding the police. I hope people are paying attention. I know I am, and I’m gonna talk about it my race– why all these liberals wanna beat me? They agree with the mob, and that’s what’s really on the ballot; the mob and the squad,” Senator Graham warned.

“At the end of the day, I hope you’re paying attention, folks. They’re gonna change your country, if you don’t go out and vote and bring a friend,” he added.

The biggest loser from any effort to ‘Defund the Police’ will be the poorest and most crime-ridden neighborhoods throughout the country. https://t.co/OtSVb3SS9m

If you want to see what life is like where there are no police, courts, or justice systems, spend some time in the Middle East.

A bad idea for America.