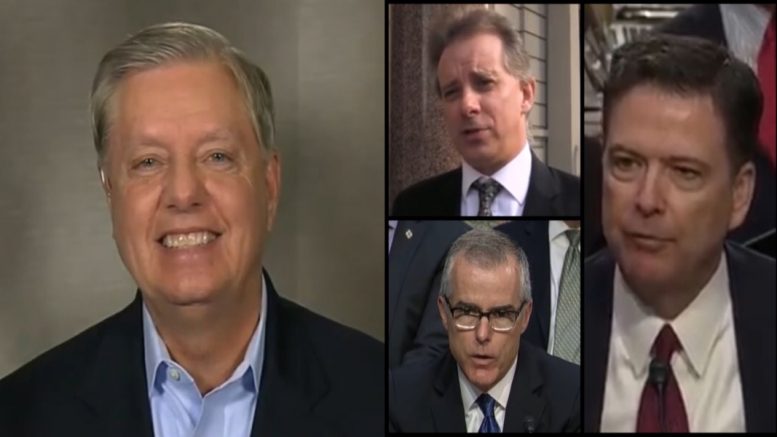 Senate Judiciary Chairman Lindsey Graham (R-SC) told host Sean Hannity on Fox News Wednesday, that he wants a key memo from the Russia investigation made public as it will likely indict the character of several individuals.

The memo in question, according to Graham, concerns a January 2017 FBI interview of a Russian “sub-source” who provided material for the now-infamous Steele dossier, which was compiled by former MI6 spy Christopher Steele prior of the 2016 election and detailed various salacious, unconfirmed allegations against Trump, Fox News reported.

“Let me tell you what’s coming up from the Judiciary Committee; remember the Horowitz report indicated an intel analyst and a case agent interviewed the Russian sub-source in January for three days and again in March? They actually produced a memo of about 40 pages detailing how unreliable the dossier was,” Senator Graham told Hannity.

He also pointed out that the FBI “renewed the warrant in April and June of 2017”.

“Here’s what I’m here to tell you: I want the memo out to the public so they can read it for themselves. I think we’re days away from having it declassified, not weeks,” Senator Graham predicted. “And here’s my point: anybody that read that memo or was briefed about the memo and continued to use the dossier to get a warrant against Carter Page in April and June of 2017 — they are in big-time trouble.”

“The Russian was on Christopher Steele’s payroll, he wasn’t a contractor,” Graham said. “After you talk to the guy who put the memo together, and you got a 40-page document explaining why it’s not reliable, and you use it after that, you’re really in trouble with the court.”

“If I’m told be careful, don’t use this, you need to check it out and somebody fails to do it– yeah, they’re in trouble. But if you know– if you’ve actually been told by the person who prepared it, ‘You shouldn’t use it’– that’s a crime,” he explained.

“And there’s another document coming out that you’ve never seen or heard about before that’s incredibly damning. The FBI knew that the document was unreliable in January and February, and they continued to use it April and June. Somebody can go to jail over this. Stay tuned,” Senator Graham warned.

In May, Attorney General William Barr spoke with CBS News senior investigative correspondent Catherine Herridge, weighing in on the unverified Steel dossier and revealed that “Robert Mueller was responsible for looking at [the dossier] under his charter”.

“I think that is something that Robert Mueller was responsible for looking at under his charter, which is the potential of Russian influence. But I think it was ignored, and there was mounting indications that this could very well have been happening, and no one really stopped to look at it,” the attorney general said, when asked about declassified footnotes in the Horowitz report, which suggest that the dossier was likely the product of Russian disinformation.

(Related: Nunes Slams Mueller: “I’m Quite Sure He Did Not Write That Op-Ed… Just Like He Wasn’t Running The Investigation”)