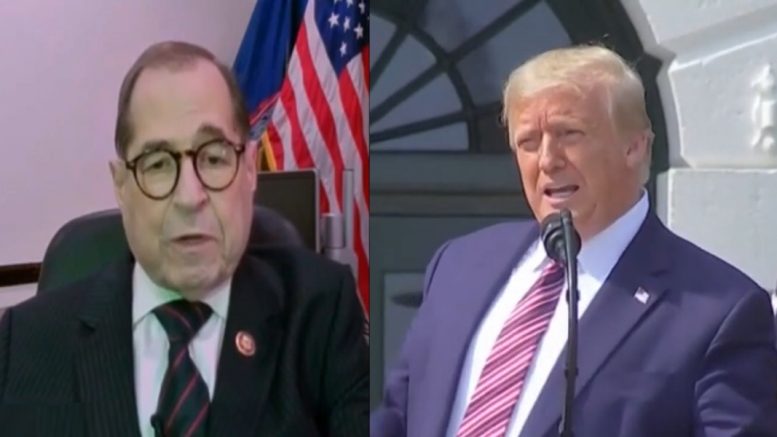 House Judiciary Committee Chairman Jerrold Nadler (D-NY) announced Friday that the panel will mark up two bills next week intended to rein in President Trump’s pardon powers, a move that comes days after Trump commuted the sentence of his longtime ally Roger Stone, The Hill reported.

The first of the proposed measures to be taken up next Thursday would force the Justice Department to share with Congress files from pardons tied to investigations of the president, according to Nadler’s announcement. The second measure, the No President is Above the Law Act, would pause the statute of limitations for a president’s crimes committed during or before their presidency, per The Hill.

Chairman Jerrold Nadler released the following statement on the markup:

President Trump and his friend Roger Stone did what they said they would do. Stone misled federal investigators, intimidated a witnesses, and was convicted for obstruction of justice—but would not testify to the President’s wrongdoing. In exchange, President Trump made sure that Stone will never spend a day in prison. This quid pro quo is unacceptable. Congress must act.

When the committee meets on July 23, we will consider two measures. The first, H.R. 1627, the Abuse of the Pardon Power Prevention Act, will allow us a measure of transparency into the President’s power to pardon federal crimes and commute federal sentences.

If the President uses the powers of his office to shield himself and his family from federal investigations, then the investigators at the Department of Justice should provide us with the materials related to the underlying offense. Continued Below

The second bill we will consider, H.R. 2678, the No President is Above the Law Act, is also straightforward. While the President is in office, we should pause the clock on the statute of limitations for any crimes he may have committed. Re-election should not be a get-out-of-jail-free card.

These are commonsense, good government reforms made necessary by this President’s conduct but applicable to anyone who may hold the office in the future. In this country, no one is above the law—not President Trump, and not presidents to come.

The markup will take place on July 23, 2020 at 10:00 a.m. ET. The process of marking up bills and resolutions in committees of the House of Representatives generally resembles, but does not perfectly replicate, the process of amending measures on the House floor. Continued Below

Nadler’s statement follows the White House’s announcement last week when President Donald Trump had granted clemency for Stone, a campaign adviser for his 2016 White House bid who had been sentenced to more than three years in prison in connection with former special counsel Robert Mueller’s Russia investigation.

The president commuted Stone’s sentence four days before the Republican operative was set to report to prison. White House press secretary Kayleigh McEnany issued a statement last week announcing the commutation, saying Roger Stone is “a victim of the Russia Hoax that the Left and its allies in the media perpetuated for years in an attempt to undermine the Trump Presidency.”

“There was never any collusion between the Trump Campaign, or the Trump Administration, with Russia. Roger Stone has already suffered greatly,” she said. “He was treated very unfairly, as were many others in this case. Roger Stone is now a free man!” Continued Below

President of Judicial Watch, Tom Fitton responded to Nadler’s mark up, writing on Twitter Friday: “Nadler keeps up his coup attack on @realDonaldTrump. The threats to the Republic aren’t only from communist rioters in the streets….”

Nadler keeps up his coup attack on @realDonaldTrump. The threats to the Republic aren't only from communist rioters in the streets…. https://t.co/JlbvzygFyA

Where was #Nadler ‘s outrage when Obama commuted the sentence of #ChelseaManning , the greatest theft & leak of US classified material that put American lives at risk.