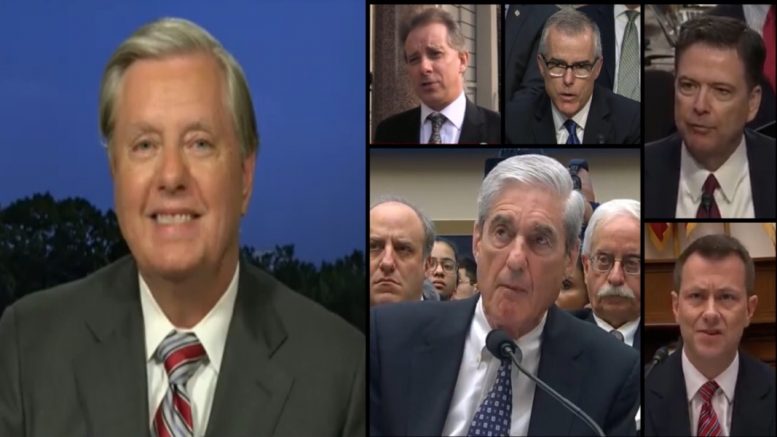 Senator Lindsey Graham told host Sean Hannity on Fox News Wednesday, that he wanted a key memo from the Russia investigation made public as it will likely indict the character of several individuals. On Friday, it was released.

The Republicans on the Senate Judiciary Committee on Friday released newly declassified documents that they say “significantly undercut” the “reliability” of the infamous Steele dossier from the Russia probe, as well as the accuracy and reliability of the factual assertions in the Foreign Intelligence Surveillance Act (FISA) warrants against former Trump campaign aide Carter Page, Fox News reported.

The memo, according to Senator Graham, shows a January 2017 FBI interview of a Russian “sub-source” who provided material for the now-infamous Steele dossier, which was compiled by former MI6 spy Christopher Steele prior of the 2016 election and detailed various salacious, unconfirmed allegations against Trump.

The first document is a 57-page summary of a three-day interview the FBI conducted with ex-British intelligence officer Christopher Steele’s so-called “Primary Sub-source” in January of 2017. Steele authored the unverified anti-Trump dossier of claims about alleged ties between Donald Trump and Russia that served as the basis for FISA warrants obtained against Carter Page.

According to the committee, the source, told the FBI during interviews in January and March of 2017, that the information contained in the anti-Trump dossier was unreliable.

The document revealed that the dossier was “unsubstantiated and unreliable,” according to sources who reviewed it, and showed that the FBI was on notice of the dossier’s credibility problems, yet continued to seek further FISA warrant renewals for Carter Page. Continued Below

The document reveals that the primary “source” of Steele’s election reporting was not some well-connected current or former Russian official, but a non-Russian based contract employee of Christopher Steele’s firm. Moreover, it demonstrates that the information that Steele’s primary source provided him was second and third-hand information and rumor at best, according to the committee.

The document also revealed that Steele’s primary sub-source “disagreed with and was surprised by” how information he gave Steele was then conveyed by Steele in the dossier.

The document, according to the committee, further demonstrates that the dossier “played a central and essential role” in obtaining a FISA against Page, and “should never have been presented to the FISA court.” Continued Below

The article was titled “Trump Campaign Aides Had Repeated Contacts with Russian Intelligence“, and Strzok’s notes stated that the “recent interviews and investigation, however, reveal Steele may not be in a position to judge the reliability of his sub-source network.”

The second document, according to the committee, also indicates that “the FBI may have been using foreign intelligence gathering techniques to impermissibly unmask and analyze existing and future intelligence collection regarding U.S. persons associated with the Trump campaign.”

“Both the CIA and NSA are aware of our subjects and throughout the summer we provided them names and selectors for queries of their holdings as well as prospective collection,” the document said, according to sources who reviewed it. Continued Below

“The quote does not provide enough information to fully understand exactly what the FBI was doing but impermissible unmasking and analysis of existing and future incidental intelligence collection of U.S. persons would be troubling,” according to the committee.

The document also raises questions as to whether the FBI was properly using intelligence techniques and databases “throughout the summer” considering that the earliest formal investigation of a U.S. person associated with the Trump campaign was not officially opened until July 31, 2016, the committee stated.

Most importantly after this interview of the sub-source and the subsequent memo detailing the contents of the interview, it was a miscarriage of justice for the FBI and the Department of Justice to continue to seek a FISA warrant against Carter Page in April and June of 2017.

Those who knew or should have known of this development and continued to pursue a FISA warrant against Mr. Page anyway are in deep legal jeopardy in my view.

The statements by Mr. Strzok question the entire premise of the FBI’s investigation of the Trump Campaign and make it even more outrageous that the Mueller team continued this investigation for almost two and a half years.

These documents, which I have long sought, tell a damning story for anyone who’s interested in trying to find the truth behind the corrupt nature of the FBI’s investigation into the Trump campaign in 2016 and beyond.

Today, Chairman @LindseyGrahamSC released two recently declassified documents that significantly undercut the reliability of the Steele dossier and the accuracy and reliability of many of the factual assertions in the Carter Page FISA applications.