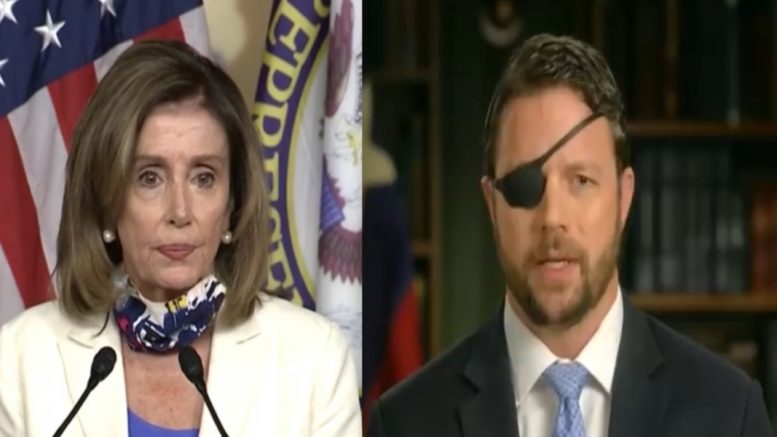 This comes as Portland Mayor Ted Wheeler demanded that President Donald Trump remove federal agents deployed to the city amid criticisms of a heavy-handed response against protesters and journalists and reports that militarized law enforcement personnel have refused to identify themselves, Fox News reported.

“Keep your troops in your own buildings, or have them leave our city,” Mayor Wheeler said at a news conference Friday. “This is part of the core media strategy out of Trump’s White House: to use federal troops to bolster his sagging polling data. And it is an absolute abuse of federal law enforcement officials.”

Speaker Pelosi took to Twitter on Friday evening following suit by declaring, “Trump [and] his stormtroopers must be stopped”.

“Unidentified stormtroopers. Unmarked cars. Kidnapping protesters and causing severe injuries in response to graffiti. These are not the actions of a democratic republic. @DHSgov’s actions in Portland undermine its mission. Trump & his stormtroopers must be stopped,” Pelosi tweeted.

“First Amendment speech should never be met with one-sided violence from federal agents acting as Trump’s secret police, especially when unidentified. This is disgraceful behavior we would expect from a banana republic — not the government of the United States,” she wrote. Continued Below

First Amendment speech should never be met with one-sided violence from federal agents acting as Trump’s secret police, especially when unidentified. This is disgraceful behavior we would expect from a banana republic — not the government of the United States.

From The Daily Wire:

Far-left publication The Nation reported on Friday that a unit from Customs and Border Protection (CBP) was behind the arrests in Portland where federal officers used unmarked cars to roll up and made arrests in response to violent riots that have rocked the city for nearly 50 days straight.

“The Portland arrest of Mark Pettibone, first reported by Oregon Public Broadcasting, followed several similar arrests involving officers from a Border Patrol Tactical Unit (BORTAC)—CBP’s equivalent of a SWAT team—as well as the US Marshals Special Operations Group,” the report said. “A CBP spokesman confirmed to The Nation that CBP agents were responsible for the arrest, pointing to authorities under the Protecting American Communities Task Force.”

Pelosi’s claim that the officials were “kidnapping protesters” in response to “graffiti” is wildly misleading. The Washington Post documented one man who was arrested and the process that he went through, which resulted in his brief detainment and release.

“He was detained and searched,” The Post said. “One man asked him if he had any weapons; he did not. They drove him to the federal courthouse and placed him in a holding cell.”

“Two officers eventually returned to read his Miranda rights and ask if he would waive those rights to answer a few questions; he did not,” The Post added. “And almost as suddenly as they had grabbed him off the street, the men let him go.” Continued Below

Continued From The Daily Wire:

Pelosi’s use of certain phrases and terms—including “stormtroopers,” “Trump & his stormtroopers,” and “Trump’s secret police”—could be interpreted as an attempt to smear them as Nazis, which is something that the political Left has repeatedly done throughout the Trump-era.

During Adolf Hitler’s rise to power, the Sturmabteilung, called the “SA” and “Brownshirts”, was a paramilitary organization that inflicted violent and intimidation that helped Hitler gain power. They were also known as “Storm Troopers.”

The Gestapo, also known as the “Secret State Police,” was “non-uniformed police” who “used ruthless and cruel methods throughout Germany to identify and arrest political opponents and others who refused to obey laws and policies of the Nazi regime,” The Holocaust Encyclopedia reported. “In the months after Hitler took power, the SA and Gestapo agents went from door to door looking for Hitler’s enemies. Socialists, Communists, trade union leaders, and others who had spoken out against the Nazi party were arrested, and some were killed.”

Pelosi’s claim that the federal authorities were deployed because of “graffiti” is categorically false.

“Each night, lawless anarchists destroy and desecrate property, including the federal courthouse, and attack the brave law enforcement officers protecting it,” Acting DHS Secretary Chad Wolf said. “A federal courthouse is a symbol of justice – to attack it is to attack America. Instead of addressing violent criminals in their communities, local and state leaders are instead focusing on placing blame on law enforcement and requesting fewer officers in their community.” Video Below

Meanwhile, Rep. Dan Crenshaw (R-TX) reacted to Pelosi’s claims, writing: “Graffiti? What a lie. Democrats are openly accepting mob violence, while disparaging law enforcement as ‘stormtroopers.’ Share this. Americans must understand that voting Democrat is a vote against safety and order.”

He also noted “actual arrest info” in his tweet.

We leave you with Acting Deputy Secretary of Homeland Security, Ken Cuccinelli, who responded to Portland Mayor Ted Wheeler’s demand for federal officers to leave the city.

(Related: Pelosi On Christopher Columbus Statue Thrown In Baltimore Harbor: “People Will Do What They Do”)